A funny scene was captured on camera at Burna Boy live concert in Lagos as two men decided to settle it out publicly, leaving other guests entertained with their act of folly.

The incident is reported to have happened at the ‘Burna Live’ hosted by musician Burna Boy on the 26th of December, 2018 at Eko Convention Centre, Victoria Island, Lagos.

According to an eyewitness, a man took another man’s wife to Burna Boy’s Concert, only for the husband of the lady to storm the venue and engage him in a fight.

The concert which was undoubtedly one of the most discussed musical occasions of the year, saw the two grown-up men fight each other with free flow of punches and slaps at the event.

In case you missed: Here's the trending video of a husband fighting another man for taking his wife to Burna Boy's #BurnaLive concert last night in Lagos. pic.twitter.com/loSc6BwUkF 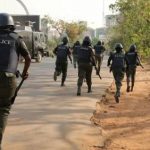 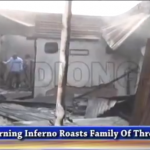