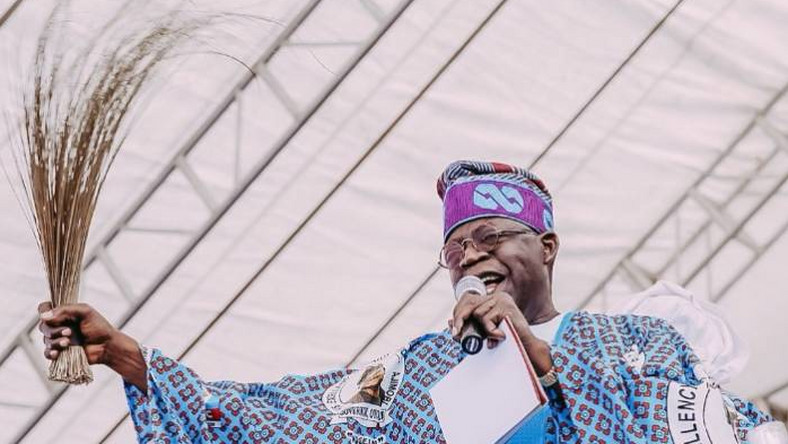 The National Leader of All Progressives Congress (APC), Bola Tinubu, was heard in a leaked audio tape promising to share a huge sum of money to the party faithful members if their votes can secure the re-election for President Muhammadu Buhari.

In a leaked audio tape, Tinubu also disclosed that he had enough money to bankroll elections without requesting any money from Buhari or dipping his hands in Lagos State’s treasury.

The leaked audio tape was obtained from an authoritative source that pleaded anonymity.

In Part 1 of the #TinubuTapes, Bola @AsiwajuTinubu, speaking in Yoruba, says “after I see result is when I will bring out huge cash for you all.”

Part 2 where he insults the Igbos as ‘awon okoro” coming soon.

So, as registered APC members, you have to go and get your neighbours to come out and vote for the APC. It is after I have seen the favourable results of the elections that I will bring out good money.

Therefore, whatever I’m promising you is for real – and it is coming from my own pocket. It is not until I go to Alausa before I can get money to give you.”

He, however, told the APC supporters who had come to visit him in preparation for the now-postponed presidential and federal parliamentary polls that he would reward them financially after they had “delivered victory” for Buhari.

“Before now, party faithful would gather here around me like ants around sugar, asking for mobilisation. They always succeeded in getting something substantial from me with many of them from the same areas.

“That was then. This time it does not matter if your footwear wears out. Once you can deliver in this election, I am committed to give money that is substantial. We’ll never lack.” The maverick politician also stunned his supporters when he admitted demeaning the people of Osun State. Until now Tinubu had denied making any denigrating statements regarding the financial capacity of the state.

“I was called names (after making a misguided statement in Osun State during its governorship poll). I made a misguided utterance but I got away with it.

“In Osun, they were grumbling that the governorship candidate in the last election was brought from Lagos; Aregbe (former Osun State Governor, Rauf Aregbesola) too was brought from there and now it’s (Adegboyega) Oyetola…they were complaining.”

Tinubu said he could not understand why some people in the state would complain about his choice of Aregbesola and later Oyetola. He argued:

“So, when we trained your children; after training them they got the brain and experience. They’ve acquired the know-how. Will it be bad for them to return home to fix things that are broken? How much really is your (Osun people) money that I want to embezzle? You (Osun people) don’t have the kind of money that I have. Their king was there seated when I said so.

“I said: ‘You don’t have the kind of money that I have.’ If I’m going to change your (Osun people’s) money it will be coins.’ I never knew I was being recorded and that was how the video went viral. For that reason, I have to be guided in my speech right now in order to avoid saying a similar thing today.”

Last September, Tinubu had claimed that his statement was twisted and intended to cause “bad blood” and thus pitch him against the Ataoja of Osogbo, Jimoh Olanipekun (in whose palace he made the disparaging comment) and the people of the state.

“For the avoidance of doubts, however, Asiwaju Tinubu did not disparage the people of Osogbo in his remarks at the palace. What the APC leader said is that in vying for Osun governorship, the party’s candidate, Alhaji Isiaka Gboyega Oyetola, is motivated by service and not by any selfish consideration,” a statement by his spokesman, Tunde Rahman, had said in his defence.

Kuje school of horror where students are subjected to sodomy, cannibalism and Brutality.