There was mild drama at the Imo West collation centre after the Independent National Electoral Commission (INEC)’s returning officer stopped collating results and announced that he has been directed to immediately return to Owerri, Imo State.

According to Premium Times, the returning officer, Professor I.I. Ibeabuchi, stopped the collation after announcing nine out of the 12 local governments in the district, saying he had been directed to return to Owerri, the rest of the result will be announced on Monday morning.

Efforts to make him continue had been unsuccessful.

The State Governor, Rochas Okorocha, who is the All Progressives Congress (APC)’s senatorial candidate, has already won eight out the 12 already collated local governments.

Okorocha stormed the collation centre in the early hours of Monday after Ibeabuchi’s announcement in an attempt to persuade the INEC Returning officer to continue with the process.

Journalists and election observers were ordered out of the room and APC members at the centre insisted the returning officer cannot leave until he has finished announcing the result.

John Onyeriri, the candidate of the Peoples Democratic Party (PDP) is also at the collation centre.

They insisted the returning officer “must complete” announcing the results, “otherwise, he is not going anywhere.

However, Ibeabuchi reportedly stuck to his guns and refused to be persuaded to stay by the governor. 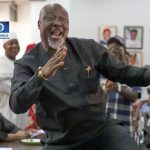 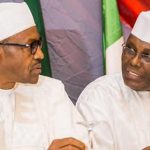