President Muhammadu Buhari and his wife, Aisha, on Saturday, joined hundreds of another electorate to vote in Daura, Katsina State.

Speaking after casting his vote, Buhari said that the security agencies in various states across the country have been empowered to tackle any security challenge.

President Buhari, also reacting to the decision of Atiku to seek legal redress over the outcome of the election, told newsmen at the polling unit that he expected that to happen. He said:

“Also the challenge of APC victory at the electoral tribunal by Peoples Democratic Party is expected.

“I will leave it (security) to the law enforcement agencies especially the police because they have been meeting virtually on a 48-hour basis to make sure that they have identified the flashpoints, as you mentioned, wherever they are and make arrangements to counter it,”

Atiku had challenged the presidential results, demanding that materials used for the Feb. 23 presidential election be inspected by his legal team. 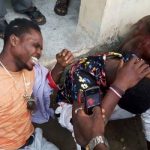 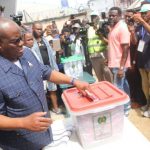