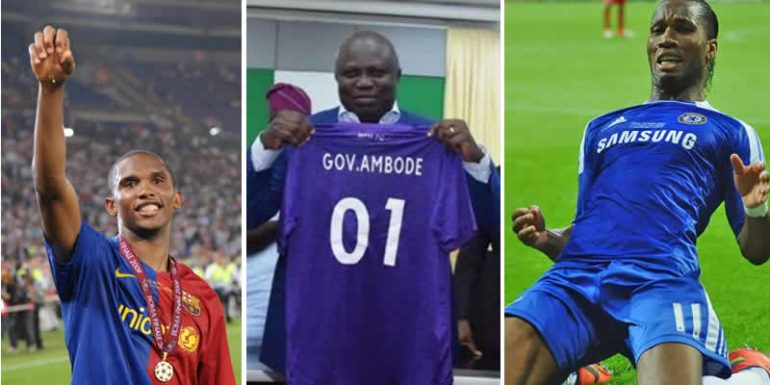 A testimonial match organized in honor of outgoing Governor Akinwunmi Ambode of Lagos State will feature African football legends within Nigeria and abroad on Saturday in Agege Stadium, Lagos.

Dr Kweku Tandoh, Chairman, Lagos State Sports Commission, in a statement released on Thursday, revealed that the event which will be tagged ‘Match for Ambode’ was put together in honour of the Governor’s laudable contributions to sports development in Lagos since he assumed office in 2015.

“Among the stars that have confirmed their participation for the one-day event include the President of Liberia and former world footballer award winner, George Weah, Cameroonian Samuel Eto’o, Ivorian Didier Drogba.

Dr Kweku also noted that the organizers, a group of ex-internationals led by Waidi Akanni, have promised to put up a memorable event.

The testimonial match with feature A-list artistes to spice up the event. Some of the mentioned artistes are Wizkid, Small Doctor amongst many others. The event is set to start by 10a.m. on Saturday.

READ ALSO
2019 Presidential Election Is Highest Form of Corruption, It Was Neither Transparent, Free Nor Fair - Peter Obi