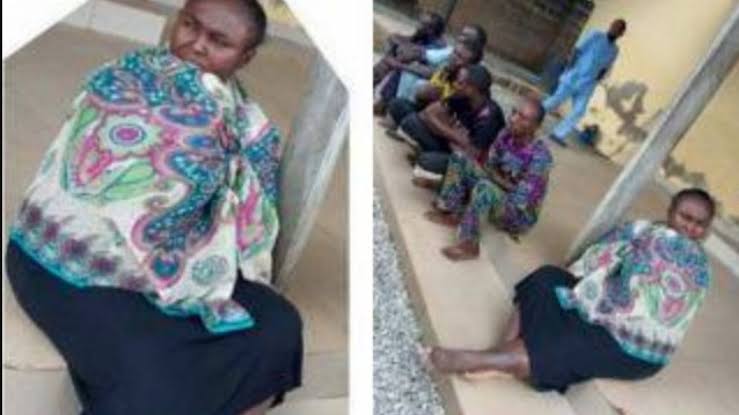 The woman who was paraded police confessed that she faked her own kidnap in order to get money from family members to assist her husband raise money to start a business.

According to the woman, her husband is a pensioner with the Kogi state government and has not received his pensions for many years now, making life difficult for them.

Mrs. Samuel further explained that her husband’s family members who are financially bouyant have also refused to help them, hence reason for her arranged kidnapped.

“I did it to help my husband raise money to start a busines since the Kogi state government has refused to pay them and the family members are not helping either. I know the family members have money and they will raise the money if they tell them that I have been kidnapped,” she said.

The state commissioner of police, CP Kayode Egbetokun, while parading the suspects said Samuel hatched a self kidnapped scenario but was arrested at the Kulende, Sango area of Ilorin after she demanded for N5,000,000.

Egbetokun said Mrs Samuel left home on June 15 and went into hiding, claiming she was kidnapped by an unknown gang while cleaning the compound.

He said that the housewife who was the only one speaking to the husband’s family on phone, claimed the kidnappers were not willing to talk to anyone due to fear of their voice being recognised.

He said the woman called her husband that she had been taken to unknown destination and demanded N5 million ransom for her release.

The police commissioner said that effort was intensified and the said amount was provided by her husband’s family and well-wishers.

He said that unknowing to the woman that the money had been provided, she later called the husband’s family and said the ransom had been reduce to N1 million.

Egbetokun said further that the family reported the case to the police and a team of operatives tracked the suspect’s phone calls to Kulende area where she hid herself in her parent’s rented apartment.