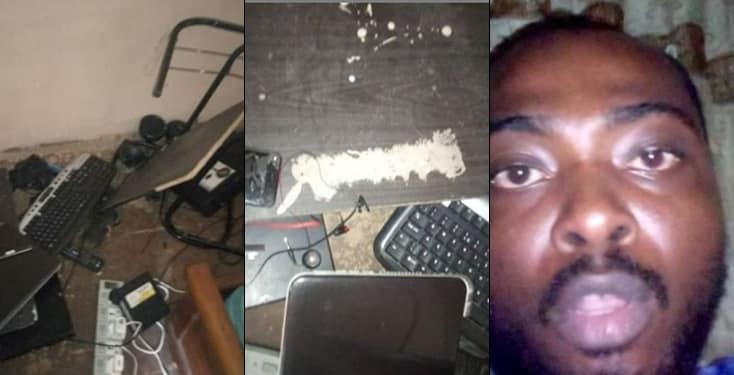 Nigerian musician, Nel Carter has taken to social media to cry out Nigerians, accusing his elder brother of trying to kill him at his residence in Delta State.

According to Nel Carter, his life was almost cut short on Tuesday, June 11th, 2019 by his own elder brother identified as Kelvin Ify Emuebie who attacked him with two other cultists and destroyed some of his properties.

The musician, who made this accusation on his Instagram page, claims he has reported the matter to the Police in Agbor but his elder brother is still walking freely in the state. Sharing photos of his destroyed property, he wrote:

“Getting back inside my room I discovered that my laptop, phones, DVD Player, and many other items had been destroyed by them as my room was broken into.

“I went to the @nigerianpoliceforce Agbor division, and made complaint about it. Since then, Kelvin Ify Emuebie has been walking freely and I’ve been treating a dislocated shoulder, body pains and fever.”