According to SaharaReporters, Omoiri had gone to a beer parlour belonging to Uduophori at Okolona, Effurun in Warri on Thursday a day after the court judgment to have a drink with friends to celebrate Buhari’s victory.

When he got there, an argument ensued between him and Uduophori over the President’s tribunal victory on Wednesday, and he was reportedly stabbed by the owner of the joint, who is a PDP supporter.

The victim was said to be struggling to survive at an undisclosed hospital over injuries he sustained on his neck, head and other body parts.

Policemen from the area command in Warri who visited the hospital to get his statement refused to speak on the matter.

But, one of the cops, who spoke to newsmen on the condition of anonymity said the case was being treated as attempted murder. 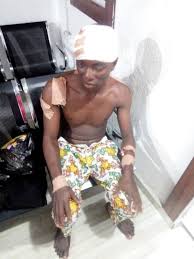