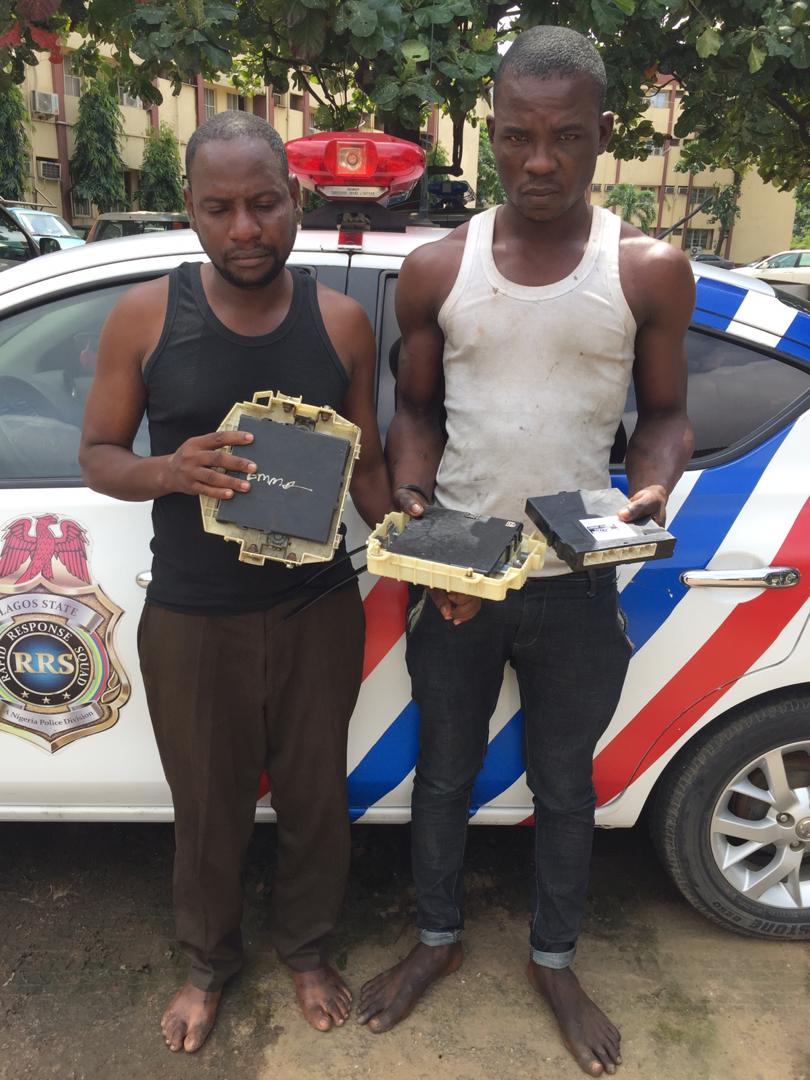 Two suspects, Sodiq Musa, 28, and Saidu Atiku, 34, who specializes in vandalizing vehicles and stealing their brain boxes, have confessed to the police that it takes them less than four minutes to steal the brain box of a vehicle.

The two men were said to have been arrested at 27, Awolowo Road, Ikeja, Lagos, with three Toyota vehicle brain boxes. A third member of the gang, identified as Adamu Ridwan, allegedly escaped with all fourth box.

“I worked in Lagos as a barbeque man in various hotels and events before I met Ridwan who introduced me to brain box theft where He taught me all the antics and styles.”

“The spark plug reduces the noise and effects quick break of any vehicle window and we tie the plug in a handkerchief in a situation where we have multiple vehicles to work on.”

In his confessional statement to the RRS operatives, Sodiq told the officers that Saidu was a security guard who works for a company located on that street where they were arrested and had earlier in the day called Ridwan who is the leader of the team to come feast on vehicles belonging to their company which are parked outside the company’s premises but which he Saidu is supposed to guard.

On getting the hint, Ridwan and Sodiq set to action and got to the venue around 1:00 a.m. The broke into two Toyota Hiace and two Toyota Hilux belonging to the company who employed Saidu as night guard stealing their brain boxes before another security nearby raised alarm. This led to their arrest. Sodiq was caught with three boxes while Ridwan fled with one.

Sodiq was thereafter taken to RRS Headquarters, where he confessed the involvement of Saidu. He disvlosed that he invited them for the operation and was reported to have slept beside the vehicles, which they vandalized and stole from while Saidu cooperated and pretended like nothing was happening.

“We specialised in stealing Toyota brain boxes because they fetch good money in the market. The demand for them are higher than any other brand. For example we sold a Toyota Hiace bus for N40,000 while that of Toyota Hilux goes for N20,000 respectively”.

“Ridwan connects with the buyers of the brain boxes who he claimed are from the popular spare part market in Lagos. We always meet the buyers outside the market where we exchange our loots for cash.

They usually pay in cash and will never wait more than two minutes as we already have an understanding on the prices”.

“Ridwan gives me 40% of whatever we make from the sale of our loots. He has never disclosed where we were to carry out our next operation because he feels he is my boss.

“Our target areas are usually night clubs where people come with different types of vehicles. We strike around 1:00 a.m. – 2:00 a.m. when most of the clubbers would have started enjoying themselves”.

The Commissioner of Police, CP Zubairu Muazu in his reaction to the incident directed the transfer of the case to State CID, Panti.

He advised night clubbers in the State to be extra careful while enjoying themselves and leaving their vehicles parked where it’s not safe.