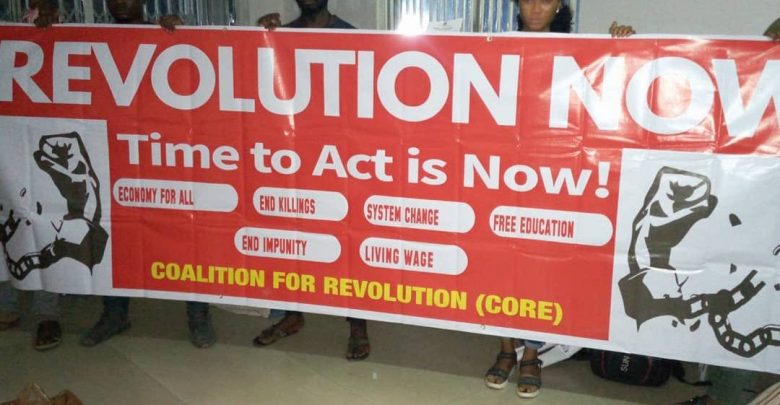 The #RevolutionNow Organizers have released the ‘Rules of Engagement’ for monday’s massive protest all over Nigeria.

Below is a statement released by the group:

“The Coalition of Revolution (CORE) seizes this opportunity to call on mass of Nigerians who have shown tired of the suffering in the land and the oppressive system that keeps enriching the rich at the expense of the poor.”

“It is no gainsaying that the Country has been plunged into crises by bereft leadership who have turned the Country into a ‘business centre’.”

“CORE is reiterating all the demands at this hour for proper clarification as usual.”

“The Police may have to explain to the world how the following listed demands would lead to a violent protest and treasonable felony like the Police PRO, DCP Frank Mba stated in the Force Press Release issued yesterday.”

“We understand that this is the crude old trick of the State to create fear in the minds of oppressed to delay their day of freedom.”

“But it is more glaring this time around that Nigerians have taken their destinies in their hands and are saying Enough is Enough to hardship, insecurity, insurgency, incessant killings, epileptic power supply, disrespect of court orders, blatant abuse of power and office, embarrassing corruption.”

1. An economy that works for all and not a handful of individuals, banks and foreign multi-nationals.

2. An effective and democratic end to insecurity and insurgency.

3. An end to systemic corruption and for total system change in the interest of all.

4. The immediate implementation of the 30,000 naira minimum wage at all levels in the public service as agreed with the trade unions.

5. Education as an enforceable right and not a priviledge.

1. We eschew all forms of violence. No protester should throw any object as little as stones or attack any security officials.

We are aware of their intent to provoke the mass unduly by using undue tactics and sponsored agents, so as to give the protest a bad name.

We encourage all Nigerians to remain calm as we are ready to fight these injustices to a logical conclusion.

3. Irrespective of the colour orange recognized as the insignia of the protest, everyone is free to come dressed in ANY colour.

Breaking News: SSS Confirms Arresting Sowore Because He Called For Revolution In Nigeria