Despite London being a multi-ethnic hub where a lot of African artists are selling out, Nigerian singer Davido seems with having issues with the music fans in that country.

A recent video that emerged from Burna Boy’s sold-out concert in London, shows an embarrassing moment when the crowd intentionally snubs Davido repeatedly, while he was performing his international hit songs “Blow My Mind” ft Chris Brown.

At the moment, we don’t know what transpired between Davido and the fans that they refused to sing along to him at SSE Arena in Wembley, which houses about 12,500 music fans, but all we can say is that it’s no good for somebody of his status.

A whole Davido?? I cannot can anymore #wizkid #Burna #donotopen #SydneyTalker
Buh Do not open this ? pic.twitter.com/ldQxZZxjsm 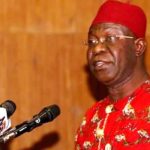