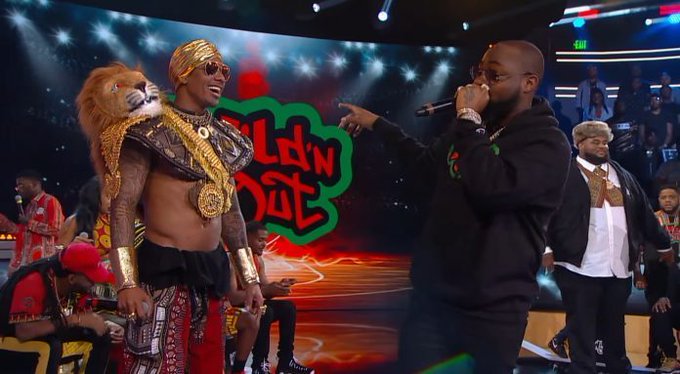 Nigerians are currently reacting to the newly released episode of Nick Cannon’s Wild N Out show in Atlanta which features Davido as the guest artiste.

This particular edition of the show was African themed and the presenter and others were dressed in native attires.

During a diss battle in the show, Davido roasted American rapper, Nick Cannon, who is the program host, as part of their way to entertain the audience.

Davido took shots at Nick Cannon’s shoe saying it’s fake, and the presenter removed it to prove to the crowd that it is not true.

Davido out here ending Nick Canon's career on #WildNOut you love to see it😂 pic.twitter.com/mleNJCGbmT

The singer also performed his hit track, Fall, and the crowd sang and danced along.

Shoutout to @davido for coming through and performing this hit 'Fall' Peep his FULL performance here 🎶🙏 Thanks for rocking with all-new #WildNOut tonight 🙌 pic.twitter.com/CIzVWP8Uet

Nigerians have reacted by taking took to the social media platform, to share their views on the performance.

Goosebumps from the crowd the moment FALL came on🔥
Watching these Americans sing FALL word for word was indeed a thing of joy
The whole performance will not only get you smiling, but also make you proud of the African continent
Once again Davido has gotten a win for us#Davido https://t.co/D1od5tdytJ

Davido’s Wild n Out episode made me cringe as expected…

Was finna watch Davido's first appearance on wild n out, then there comes an ad I always skip. I decided to watch it cause I saw it to be Fireboy's Vibration. Maaaannn, the Video is lit! TG Omori is a beast, and fireboy is a genius.

Nigerians Reacts As Burna Boy Claims ‘He’s The Best After Fela Kuti, Nobody Paved Way For Him’