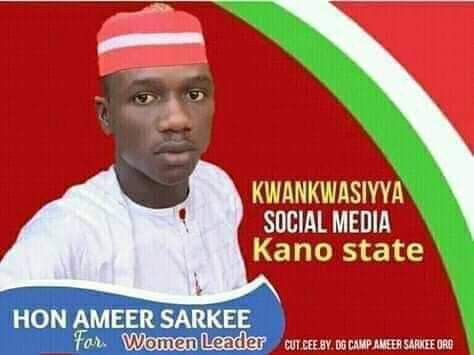 A poster circulating social media shows a young man who is contesting for the post of women leader of Kwankwasiyya Movement in Kano State.

Ameer Sarkee is seeking to be elected as the women leader of Kwankwasiyya Social Media Group.

The group is loyal to a former Kano governor and former presidential aspirant, Rabiu Kwankwaso.

The position of women leaders is typically held by a woman, but is Sarkee is aspiring that position, which has left many Nigerians wondering what he intends to achieve with it.

In Kano, an able body man is jostling for the post of a WOMEN LEADER. pic.twitter.com/fRzbh4pJoZ

If you are from Kano state and you're a membe of Kwankwasia, I present to you Hon. Ameen Sarkee as your Women Leader ? ? pic.twitter.com/hoX5kAxBr5

Meet The Person Contesting on the platform of PDP For Woman Leader In Kano, Nigeria.
His image reminds me of the conference on women’s reproductive rights held in Saudi Arabia that was attended by 350 sheiks with not one woman in attendance. ? pic.twitter.com/uxuAmGnNd6

Kano Men are now taking up "Women Leader" positions ? It's time he changes his name to "Ameerah" ???

It seems like there's lack of women representative in Kano so this guy used this opportunity to contesting a women leader ?? imagine Kano ??? pic.twitter.com/QMgvGjDFtH 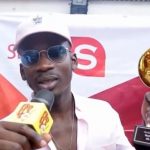