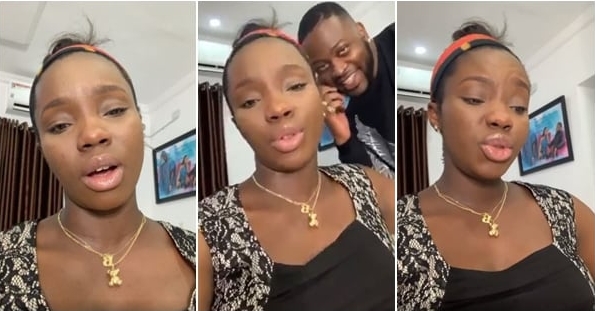 BamBam, wife of former Big Brother Naija housemate Teddy A, has opened up after it was alleged that her husband beats her.

KanyiDaily had arlier reported that a gossip blog on Instagram, @cutie_julls, claimed Teddy A used to beat up Bambam prior to their wedding in September, and he still continues to do so now that she is even pregnant.

However, in a new video shared on her Instagram page, BamBam debunked the rumour stating that her husband has never and will never hit her.

She added that as a couple, they do not support domestic violence and would deal with the person trying to tarnish their reputation.

“I usually would not come out publicly to address rumours, but this is not just a rumour or random news, but a deliberate attempt at defaming my family’s character and my husband’s reputation.

“How do you joke with something as sensitive as domestic violence? To what end? We’re newlyweds for God’s sake.

Solidstar Escapes Death After Drug Overdose, Apologizes To Whomever He Might Have Hurt

Wizkid Says He Is Getting Married Next Year, Set To Change His Stage Name