The video which was shot in 2017 resurfaced on the social media on Monday, June 15, 2020, showing the talented attacking player receiving prayers of healing for the injuries he had long been battling.

In the video, the 19-year-old midfielder, who was 16-year-old at the time, revealed that his parents are “huge fans” of Prophet TB Joshua

He also narrated how he’s been struggling with frequent injuries — including hip, groin and ankle — hindered him from playing in times of important tournaments, matches, and breakthrough moments.

READ:  Anthony Joshua Goes Into Self-Isolation After Meeting Prince Charles Who Is Infected With Coronavirus

“My name is Angel Gomes, I’m from Manchester. I’m sixteen. I play for the Manchester United Football Club. And I’ve been struggling really with injuries,” he can be heard speaking before the congregation.

“I’ve been having injuries around my hip and groin which have been affecting me playing. I also suffered ankle injury not long ago which kept me out for a long time.

“I play for Man United, I also represent England national team under-17 level as captain. I’ve known about the Synagogue Church of Nations for a long time.

“As my family follows the prophet, my parents are big fans. So we thought it would be a good time for me to come and be touched by the prophet.”

READ:  Horse Racing in Nigeria: Is Nigeria missing out with lack of horse racing events?

Speaking after the healing session, Gomes narrated his experience of being touched by the prophet’s anointing, saying:

“I just felt a little shock and I was surprised. I can really describe how I felt. Just don’t doubt what you feel on the inside. Go with your heart. When you need someone to look up to, just look to God and have faith.”

Gomes is reputed as the youngest player to represent Manchester United since Duncan Edwards, who died at 21, in 1953. He is also the first player born in the 2000s to appear in the Premier League.

In 2017, the wonder kid was said to have informed his club he wouldn’t represent England U17s at the 2017 UEFA European Championship finals in Croatia over an injury that held him back.

Many Nigerians have taken to social media to react to the viral video, as some expressed shock over his visit to SCOAN, while others empathized with him.

Woah 😳. Am in shock, I doubted that prophet. Maybe am wrong , Gomes can’t come all the way to Nigeria to fake a miracle . Angel Gomes is about to be rewarded 25k weekly contract at United .

This is no joke, only God knows the pressure this young lad ve passed through that made him think of visiting Prophet TB Joshua in Nigeria.
I feel pity for Angel Gomes tbh. Things aren't just looking good for the talented kid. Life isn't just balance🙁 pic.twitter.com/xHJ6yYoIV2

Whose idea was it for Angel Gomes to go to TB Joshua in Nigeria?

The medical staff at United are that bad that Angel Gomes instead decided to go to TB Joshua to heal his injury problems.

You hate to see it.

Is this the real Angel Gomes ?? Cos WTF ?pic.twitter.com/wRkIiEN8RC

Please what is Barca waiting for to drag Dembele like goat to the altar? 😭😭😭pic.twitter.com/vC332Cf4mq

LOL I have seen Angel Gomes with TB Joshua.

He should’ve prayed for height.

I still haven't believed this Angel Gomes video,if so y'all premier league opponents are gone!!!

How bad were our physios that Angel Gomes had to go here for healing bro this club just finds ways to embarrass me 😭😭 pic.twitter.com/pRu5eZqJqH

Watching that video made me feel for Angel Gomes, poor lad was worried about his career..

The one thing that is vexing me is who released that video now, where you dey since 😭😭😭

I don't understand the outrage about Angel Gomes going to the synagogue for healing from T.B Joshua.

If its just bants, fine. Aside that, he has done nothing wrong. 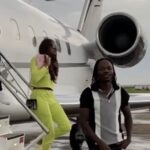