Cherry Vijah, wife of the Liberation Movement (LM) candidate in the last Bayelsa governorship election, Vijah Eldred Opuama, has asked the Inspector-General of Police, Mohammed Adamu, to release her husband who is illegally detained.

According to SaharaReporters, Opuama was arrested within the premises of the election petition tribunal in Abuja on August 15, 2020, by a team reportedly from the Office of the Inspector-General of Police and had spent two weeks in custody.

Opuama was arrested shortly after he arrived to hear the judgment of the tribunal in a case he filed seeking the disqualification of the Bayelsa deputy governor, Lawrence Ewhrujakpo, over alleged document forgery.

Though the case was dismissed by the tribunal, the candidate was forced out of his vehicle by the police, who handcuffed and whisked him away to their office in Abuja.

In a video message, his wife highlighted the pain the family had been through since he was arrested.

The woman said the politician was allegedly recording a phone call he received from a caller, who identified himself as one Benson Agadaga, the Chief of Staff to the Bayelsa State governor, before the incident happened.

She claimed that he was handcuffed and in the process an officer rushed at her and kicked her on the stomach.

“Vijah Opuama was already in handcuffs, yet the police officer rushed at me and kicked me on the stomach.

“This is just barely a week after I had a miscarriage. And I was going through pains and on heavy medications, and treatment,” she said.

She stressed that her husband has not committed any offence, as it is not a crime for him to file an election petition matter against the Governor of Bayelsa State.

Mrs Vijah appealed to President Muhammadu Buhari, the Chief Justice of Nigeria, Muhammad Tanko, civil liberty organisations, amongst others to intervene to see to the release of her husband. 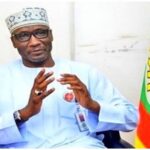 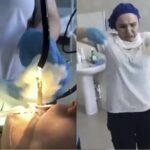