The Attorney-General of the Federation and Minister of Justice, Abubakar Malami (SAN) has ordered the Inspector-General of Police, Mohammed Adamu, to provide adequate security for the 17 APC members of Edo State House of Assembly.

This was contained in a letter with reference number HAGF/IGP/2020/Vol1/4, dated August 5, 2020, and titled: “Re: Urgent and nationalistic appeal to intervene in the restoration of constitutional democracy in Edo State of Nigeria,”

Malami said that the security measure is necessary to quell any breakdown of law and order following the controversial inauguration of the 14 members-elect on Thursday.

“I am requesting that you kindly provide adequate security measures for the purpose of the inauguration of the concerned members and the subsequent sittings of the Edo State House of Assembly,” he said.

READ:  "I Rαped Over 40 Women In One Year" - Says Kano Serial Rapist Who Was Caught In A Child's Bedroom 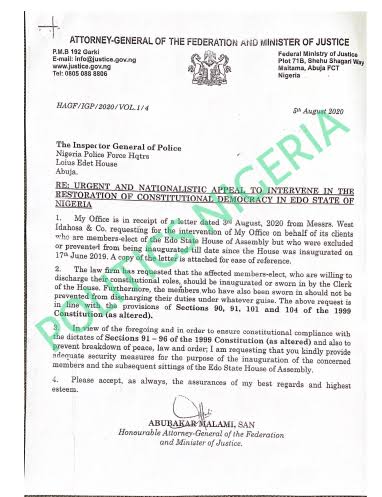 KanyiDaily had reported how 17 members of the House had on Thursday impeached the Speaker of the Assembly, Frank Okiye and his deputy, Roland Asoro, during an emergency session held at the assembly complex in Benin.

The 14 lawmakers who were left out during the inauguration of the assembly in May last year, were sworn in during the exercise.

The newly-sworn in lawmakers, including three others who had earlier sworn allegiance to the All Progressives Congress (APC) candidate in the state, Osagie Ize-Iyamu, declared that the speaker and his deputy were impeached.

Edo Assembly complex was shut down on Thursday by the state governor, Godwin Obaseki after suspected thugs took down the roof of the building, before pulling down the iconic mace figure inside the House.