Menu
First Lady Dame Patience Jonathan, has resigned her appointment as Permanent Secretary in the Bayelsa State Civil Service. She was appointed in July 2012 and was said to have left the service voluntarily. The appointment had caused outrage in the state at the time with some Bayelsans expressing misgivings about it and the extent to which the civil service was politicised.

Though Ministry of Education sources said Patience disengaged from service voluntarily, there is speculation that she resigned because of alleged rift between her and Governor Seriake Dickson.

The alleged frosty relationship between the duo was said to have been triggered by her unwillingness to support Dickson’s second term bid.

Instead, it was learnt that the First Lady had preference for the Special Assistant to the President on Domestic Matters, Mr. Waripamowei Dudafa.

It was gathered that Patience resigned to enable her to have the moral justification to fight with the governor for the soul of Bayelsa State.

At the state’s Ministry of Education on Thursday, fear pervaded the entire place as many civil servants were afraid to comment on the issue.

But our correspondent learnt from reliable sources that the ministry had computed her terminal benefits already.

For those who agreed to speak only on condition of anonymity, they said,

“The whole thing is political. It appears Madam Peace is not happy with the governor. With her resignation, the battle-line has been drawn.

“I feel the President’s wife resigned to enable her to have the moral right to slug it out with Dickson ahead of the governorship poll in the state. Let no one deceive you, the whole thing is politics. After all, she is 57 and the retirement age is 60.”

When contacted, Chief Salo Adikumo, who resigned during the week as Commissioner for Education, said he was no longer the commissioner.

“I resigned recently as commissioner to enable me to pursue my political ambition. Please direct all your questions to the Ministry,” he said.

However, a high ranking official of the ministry said it was true the First Lady had resigned.
The official, who did not want her name in print for fear of victimisation, dismissed political undercurrents in her resignation.

“I can say Dame Patience Jonathan has voluntarily retired. But whether there is political undertone in her resignation, I cannot say.

“I think the First Lady felt that her continued stay as Permanent Secretary will be depriving others.

“Already, in accordance with the civil service rules, we have prepared all her entitlements. Whatever is due her will be given to her. She will also be receiving her pension.” 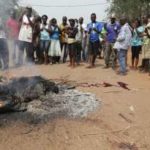