Suspected All Progressives Congress (APC) leaders in Oredo Local Government Area (LGA), were on Saturday caught sharing money to some group of voters during the ongoing governorship in Edo State.

Former Senator representing Kogi West at the National Assembly, Dino Melaye, who shared the video on his Twitter page, alleged that some supporters of the Peoples Democratic Party (PDP) clashed with APC over alleged the money-sharing.

It was gathered that the money was brought in by the APC leaders as a way of swaying the voters to vote for the party.

However, their aim of buying votes at the units was unsuccessful as voters were seen in the video grabbing each other over the money. Only one policeman was seen trying to control the situation.

READ:  Young Makeup Artist, Ijeoma Nweke Found Dead After Being Booked For A Job In Enugu

Someone trying to share money at Oredo LGA, but disrupted by PDP agents on ground and Edo people scattered the money pic.twitter.com/14vgxK3paO

KanyiDaily had also reported that some political thugs loyal to PDP have hijacked electoral materials at a polling unit in Tipper Garage, Egor area of Edo State. 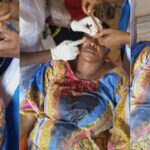 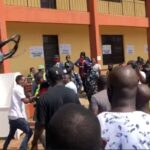