Oke Obi-Enadhuze, a fresh graduate of computer science from the Federal University of Agriculture, Abeokuta (FUNAAB) in Ogun, has been stabbed to death three hours after he tweeted “Nigeria will not end me”. 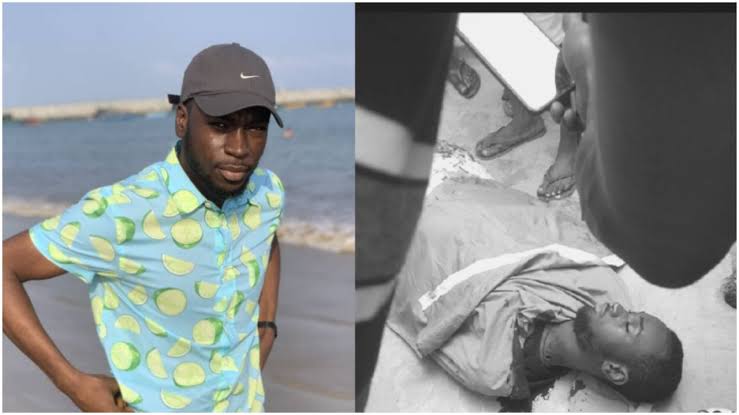 Oke’s tweet had come amid the ongoing nationwide protest against the extrajudicial activities of the now-defunct Special Anti-Robbery Squad (SARS).

Three hours after Oke tweeted: “Nigeria will not end me”, the graphic designer was said to have been killed by a stray bullet in front of his home at Mafoloku, Oshodi area of Lagos State.

Nigeria will not end me

The deceased was said to have completed his final exams in January and was waiting for the Academic Staff Union of Universities (ASUU) to call off its ongoing strike so as to complete his clearance in preparation for his one year compulsory NYSC service, before he breathed his last.

My friends bro is gone. This country killed him .I really dont know how Daniel would feel now .fuck pic.twitter.com/LyhqHC1PKv

Many Nigerians have taken to social media to mourn Oke, while calling on relevant authorities to ensure his killers are brought to book.

I’m told he’s just graduated from university. He studied computer science. He took his Final Exams in January. He was waiting to do nysc once asuu strike ends and he can get his clearance done.

He designed our blood donor app – the messages you get from us – he designed all these in like 4 days! He was a genius! He was also kinda shy. And so sweet. Oke Obi – Enadhuze!

I never imagine I would be writing this!! I’m so broken! Oke you didn’t deserve this! You were hardworking! Loving! Caring! A good boyfriend to @derinmama !! You were familyyyy! I still can’t believe this! God whyyy?? We prayed! We prayeddd!! I know you are in the perfect place! pic.twitter.com/YAdDrvROu2

Dede, a lady said to be the deceased’s girlfriend, also expressed sadness over the incident, adding that the development had shattered their dreams.

“We had forever to go Oke. What happened to our design dream. My baby didn’t deserve this. I lost my baby, I lost my best friend. Omg my boyfriend…” she wrote in a series of tweets.

But Oke’s younger brother, Daniel Obi-Enadhuze reveaed that his brother was not shot dead by a policeman rather was was killed by thugs who raided the Makinde police barrack were they live.

In series of tweets, Daniel narrated how the hoodlums stabbed his elder brother in their home, and was rejected by the two hospitals he was rushed to, before he gave up the ghost.

“Good day, My name is Obi-Enadhuze Daniel younger brother of the now deceased Okechukwu Obi-Enadhuze @O_Okee . I, my brother and mother lived at makinde police barracks, mafoluku, Oshodi, Lagos State. Today at about 11 o’clock in the morning”

“the police station at makinde was attacked by thugs who wanted to destroy the station, I my mom and brother were holed up in our house, The attack went on for hours before the thugs eventually breached the police and proceeded to set the station on fire, after accomplishing”

“this they set their sights to the barracks and began the assault, they proceeded to destroy every car in the barracks, my mom’s 2 cars where destroyed and set on fire and then they infiltrated our house by breaking the door.”

Daniels said their house was rack sacked by the thugs and their mom’s two cars were destroyed, adding that Oke died while protecting his family and was stabbed at the process.

“But got my chin instead, after this my mom and I carried my brothers body to the entrance of the station soliciting for help from the thugs still ravaging the barracks, we were finally able to put him in a wheelbarrow and took him to a hospital where he was rejected because “he was already dead”.

“Unfazed we moved him to another hospital where he met the same treatment this was where he bled his last drops of blood and died, his body has now been moved to a morgue.

“we have lost every single thing we own, as our house was completely ransacked and set on fire the only thing left is my brothers phone and at about 8 o’clock this evening the barracks was still on fire but Okechukwu has paid with the ultimate price…

“I and my mother are homeless with nothing now but we’re safe for now, we thank everyone that has been able to reach out to us, and were able to share consoling words with us in these trying times, God bless you…

READ:  Okorocha Runs To Court Over Plans To Arrest Him After May 29, Fingers APC Leaders