A Nigerian man identified as Anthony Onome Unuode has died after he was stabbed multiple times bu thugs during the ongoing protest against the extrajudicial activities of the now-defunct Special Anti-Robbery Squad (SARS) in the Kubwa area of Abuja.

It was gathared that Onome was stabbed on Saturday when he and other agitators were attacked by hoodlums during the #EndSARS protest against the SARS tactical unit of the Nigerian Police Force over its brutality, illegal arrest, extortion, extra-judicial killings, among others.

Several videos circulating on the social media showed how he was struggling to walk after losing so much blood from a wound on the head.

Anthony Onome yesterday before he died. He was stabbed multiple times by thugs sent by politicians to attack protesters in Abuja. 😭

The young man was immediately taken to the National Hospital in Abuja, where he died while receiving treatment on Sunday.

The hospital spokesperson, Tayo Haastrup, who confirmed his death on Sunday night, identified the deceased as one of those in the hospital’s morgue but said he could not confirm where he had been brought from.

KanyiDaily had also reported how Nigerians raised over N4 million to get a prosthetic leg for physically challenged lady who joined the #EndSARS protest despite having just one limb. 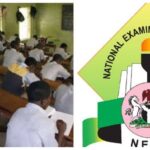