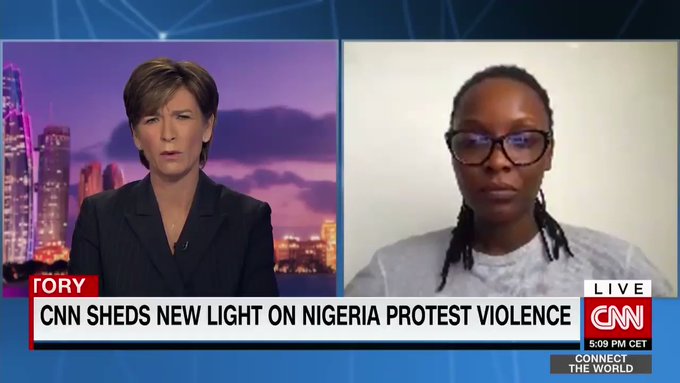 The disc jockey who witnessed and streamed live the shooting at the Lekki Toll Gate during the #EndSars protest, made this known during a chat with CNN’s Becky Anderson on Wednesday, November 18, 2020.

DJ Switch was shedding more light on how Nigerian Soldiers opened fire on peaceful #EndSARS protesters at the Lekki toll gate, killing unconfirmed number of person and injuring so many others on Tuesday night, October 21, 2020.

According to her, the President Muhammadu Buhari-led government is a dictatorship pretending to be a democracy just to sway the international community.

“I do not hold what the president of the Federal Republic of Nigeria says to heart. Nigeria is a dictatorship with a democratic face. I think that is primarily to please the international community. It is our right to protest for the change that we demand. This government has used force from the beginning,” she said.

“They started with infiltrating a peaceful protest with things but that did not work. Then they moved to bring the military in. So, the same government that says that it has banned SARS for close to four years are saying that it wants to have a dialogue. The president has not even addressed the incident that happened at the Toll Gate so I do not take his words to heart. They must show accountability.”

DJ Switch seized the opportunity to challenge the Lagos State Governor, Babajide Sanwo-Olu, to speak the truth and put an end to the conflicting stories making the round about what happened at the Lekki Toll Gate.

“With no due respect, I actually challenge the governor of Lagos State to just say the truth. They know the truth and they have confliction stories with each other. Nigerians have died and this is not a time to play games. Families are looking for their loved ones.

“To be honest with you in regards to me, I do not know how to feel because on one hand, I am grateful that I am alive today but on the other hand I don’t know if I should say I am lucky because it seems that the others were not lucky. The governor owes a responsibility to the citizen of Lagos State to say the truth,” the disc jockey said.

“The Nigerian army that is supposed to protect us came with no warning; none. There was no representative to speak to us. We heard gunshots from behind the Toll Gate because we were at the other side of the Toll Gate. We heard the gunshots and people were running so what we did was to sit down, stay still and wave our flags.

“We believed that if we waved our flags, they would know that we were not there to cause any harm but to express our rights. There was no warning, they just started shooting and people were just dropping. I cannot explain that it was just a chaotic scene that most times, I find it difficult to close my eyes without seeing those things,” she said.

DJ Switch told Anderson that after the army had left, the police surfaced. “After they left, the Nigeria Police came, SARS to be precise. From the uniforms we could see especially a man that wore white, I don’t know who he was but he had a pistol. He was just shooting at us and we had to run for our lives. That is the short story,” she said.

This is coming after CNN released its findings from an independent investigation carried out on the shooting incident involving the Nigerian Army and #EndSARS protesters at the Lekki Toll Gate.

The video documentary shows Nigerian soldiers shooting directly at #EndSARS protesters despite series of denials by the Nigerian authorities.