United States Government has finally removed all visa reciprocity fees for Nigerians seeking visas into the country which was imposed since 2019.

“The positive development is in line with the removal of excess visa application, processing and biometric fees for United States citizens applying for Nigerian visas by the Nigerian Government.

“The United States Government has therefore eliminated reciprocity fees for Nigerian citizens with effect from December 3, 2020.”

The statement added that: “Prospective Nigerian travellers to the United States are hereby advised to visit: www.travel.state.gov for details.”

KanyiDaily recalls that the US Government had on August 27, 2019, announced that Nigerians applying for US visas will be required to pay a visa issuance fee, or reciprocity fee, which took effect on August 29.

Following the outcry by Nigerians, the federal government through its Minister of Interior, Ogbeni Rauf Aregbesola, bowed to pressure and reduced the visa fee of United States (US) citizens seeking Nigerian visa from $180 to $150.

The US Embassy did not however immediately reverse its decision, but had been in talks with Nigerian authorities for several months, saying it would only act if the visa reduction fee was made official.

READ:  Atiku Speaks On Plan To Massive Lead Protest Against Buhari If He Loses At Tribunal 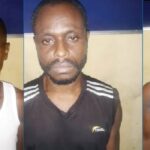