Popular Nigerian Crossdresser, Bobrisky has taken to social media to announce that he has finally met an old woman who declared love for him in a viral video. 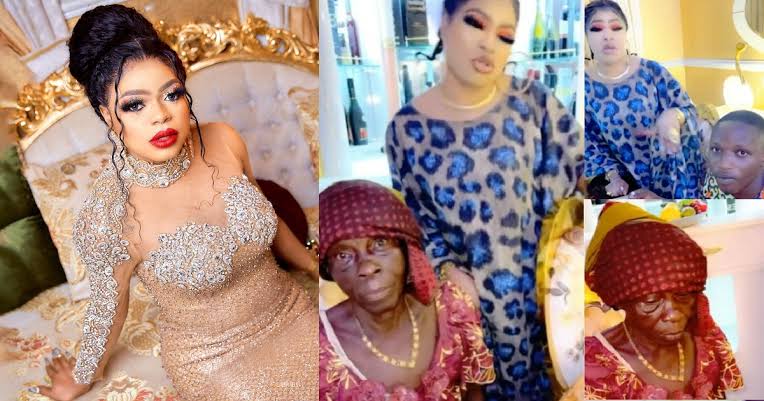 KanyiDaily recalls that Bobrisky had promised to change the life of the old woman after she was seen in a viral video holding a placard and declaring love for the crossdresser.

Yesterday, Bobrisky said he will get a new apartment for the old woman, adding that he has bought tickets for her flight to Lagos, so he could meet her in person.

Taking to his Instagram page on Friday, bobrisky revealed that he has finally welcomed the old woman and her grandson in his mansion in Lagos.

The crossdresser who a video of the granny and her son having dinner in his dining room, said he wanted them to rest properly for the night before having a discussion on what to do for them.

Noting that God had directed the family to him as their helper, the crossdresser vowed that they would never live in poverty again.

“Yaaaaaay @goodluck155553 and his grandma are in Lagos. My house precisely! They need to rest I will update you guys tomorrow. One thing I know for sure is God has sent them to their helper. I repeat they should say goodbye to POVERTY from today on,” he captioned the video.

A post shared by INSIDE LIFE (As E Dey Hot) (@inside_life_ng)

KanyiDaily had also reported how a Nigerian mum was seen in a viral video begging Bobrisky to help her son who tattooed the crossdresser’s face on his hand.

“I’m Coming For You” – Fani-Kayode’s Ex-Wife, Precious Vows To Fight Him Over Their Children