Precious Chikwendu, the estranged wife of a former minister of aviation Femi Fani-Kayode, have challenged him to share the videos of her alleged infidelity in marriage which he claimed he had. 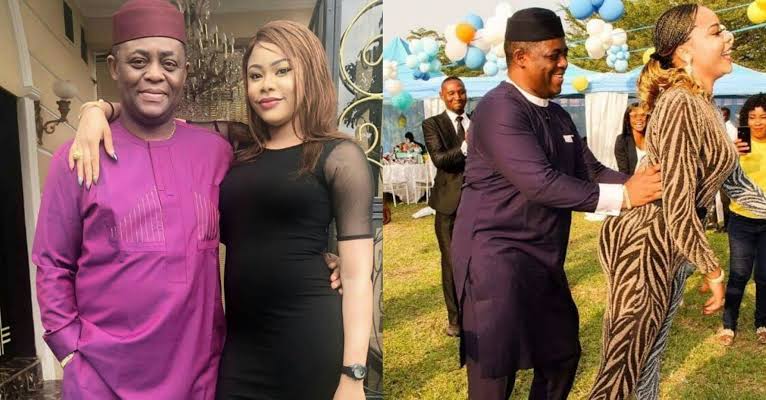 KanyiDaily recalls that Fani-Kayode had alleged that he caught Precious in bed with a married naval officer in a hotel, and she also tried to seduce his friends.

Fani-Kayode stated this last week while reacting to a suit filed by his estranged wife, Precious Chikwendu, seeking the custody of their four children.

“Chikwendu’s only pastime was to post pictures and words on Instagram and sleep with men outside. She also tried to seduce several Chief Fani-Kayode’s friends when he was in detention and extort money from them.

“On another occasion when she was caught in bed with a married naval officer in a hotel, she cut her own foot with a broken bottle and said she would tell the world that her husband did it. At least three people witnessed this,” Fani-Kayode said.

However, in a release she personally signed on Thursday, Chikwendu said that she had never had an extra-marital affair and on the contrary, Fani-Kayode “brought strange women into our matrimonial home at the slightest opportunity.”

She dared Fani-Kayode to release her sextape to prove she was having extra-marital affairs in their seven years old marriage as he claimed.

“I cannot help but wonder if all these frivolous claims of my indecent lifestyle as portrayed by FFK is not an indictment of his insecure mind. You cannot have a harlot for a wife and showcase her to the world almost every day with the best captions and poetry to go with it if she is not a fantastic soul,” she said.

“Except of course, he hides the demonic atrocities he committed while trying to appear as an excellent husband. The FFK I lived with will have the said videos shared if any infidelity claims are distantly valid for almost seven years of marriage.

“My years with FFK were completely shrouded; I walked around with at least four police officers and three bodyguards. Friends avoided me even in church as I had a heavy security presence even during offerings and thanksgiving. He perceived every schoolmate, ex, cousin, or male voice as a potential lover over the phone.

“I have never had an extramarital affair as dubiously alleged. On the contrary, FFK brought strange women into our matrimonial home at the slightest opportunity.

“After two heartbreaks, I made one wrong decision, believing that an older man will love and make me happy. All I did was love FFK, fight for him and gave him sons he never had. I did everything for him – I was his barber, editor, nurse (before and after he had his presumed COVID 19), chef, image-maker, and stylist without limit.

“Physical and verbal abuse was what I got for all these sacrifices; lies, all sorts of inhumane treatment and now attempting to keep my tender age children away from their mother.”

READ:  Congrats To Jennifer Lopez As She Is To Receive 2018 MTV Video Vanguard Award At VMAs

She added that although she had been labelled as running after Fani-Kayode’s money, the former minister was financially broke when they met in 2014.

“When I met Femi in 2014, he already had his bank accounts frozen by the Economic and Financial Crimes Commission, and they remain frozen to date. He opened another bank account when he joined the Goodluck Jonathan campaign team in 2015.

“The present government initiated an investigation based on the campaign funds source. And his campaign account was frozen again. Common sense can show that he may have been financially constrained while I was with him,” Chikwendu said.

KanyiDaily recalls that Chikwendu had vowed to fight Fani-Kayode over the custody of teir Children, saying she is ready to show him that she is not just a pretty face.

READ:  "I Slept With A Groom Before And After His Wedding" - TV Host, Yaa Nicky Confesses