Oodua Agitators led by popular Yoruba activist, Sunday Igboho shut down Akure metropolis, the capital of Ondo State, declaring that there is no going back on the agitation for Yoruba nation. 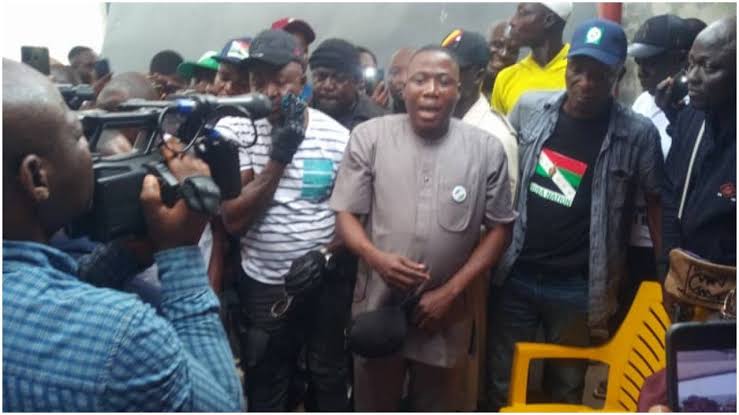 Igboho stormed Akure on Saturday alongside hundreds of his followers, emphasizing that election will not be held in 2023.

The Yoruba activist, who spoke at the palace of the Deji of Akure, said that Yorubas can not the second class citizens in Nigeria, hence the call for self-determination.

While disclosing that governors within the South-West region were behind the course for the realization of a Yoruba nation, Igboho lamented that traditional rulers have been striped of their powers due to selfish interests on the part of politicians.

“There no going back on Odua nation. There won’t be election in 2023 and all will be achieved before the year runs out.

“Fulanis are now terriorizing us on our land but it’s time for all that to end. All that we have are bing controlled by the Fulanis and that is why we are saying that enough is enough. All we want is Yoruba nation and nothing more.

Igboho also appealed to his followers to stop abusing Yoruba elders as he stated that they were also not happy with what is going on in the country.

Receiving the Igboho and his team at the Palace of the Deji of Akure, the Edemo of Akure, High Chief Afolabi Fayehun appealed to them on the need to shun violence in their agitation in order for it to scale through.

KanyiDaily recalls that Sunday Ignoho had mocked the General Overseer of the Redeemed Christian Church of God (RCCG), Pastor Enoch Adeboye, over the sudden death of his son, Pastor Dare Adeboye.

Adamu Garba Calls Out Buhari, Osinbajo, Others For Not Attending COAS Attahiru’s Burial