Bobrisky has revealed how he convinced his father to accept him as a crossdresser after he initially objected to his lifestyle as a transvestite. 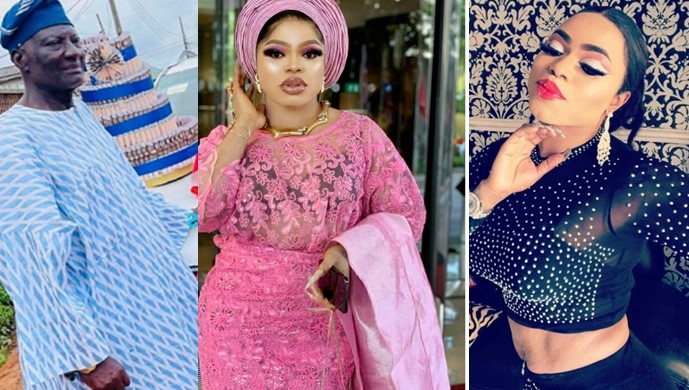 Nigerian crossdresser, Idris Okuneye, popularly known as Bobrisky, said that being a woman has made him a lot of money even though he can never be a “she”.

During a recent chat with media personality, Chude Jideonwo, the crossdresser admitted that he can be a she because he was born a man, but being a woman has paved lots of ways for him.

“Yes I was born as a Man…I can never be a she but I’m making money than the critics who condemn me. If you like address me as he or she, it doesn’t bother me…Being a woman has paved lots of ways for me, women don’t know how to use their resources as woman…when I was a guy, i didn’t have money, just there hustling, they don’t even want to associate with you but i’m not in for that, i want to be a boss of my own so i chose this path and i’m enjoying it…..”

“My initial plan was to do it for a small time to make money as a crossdresser but now i’m not ready to stop cos it is paying me millions weekly….i started cross dressing three years ago and i have built my brand in 4 years…i finished from UNILAG in 2016, i was supposed to go for my NYSC but i didn’t cos i wanted to make money…UNILAG prevented me from being Bobrisky cos my course advisor was tough…after i left school, i became free to live as i wanted…In 2018, I bought a house in Chevron, in 2019 i thought about doing surgery but i was scared and same with 2020 and in 2021, i went for lipo and tummy surgery….”

Bobrisky Reveals How His Father Accept Him As ‘Woman’

When asked how his parents handled his new lifestyle, the crossdresser said though his late mum was in full support of his dream, his father objected to his lifestyle as a transvestite.

“My mum before she passed did not judge me, she accepted me for who i am but my dad didn’t…he accepts it for business but not for a lifestyle… After I explained to him that i do it to make money to make them comfortable and live well, he had to accept…”

Shedding light on why he dressed like a ‘man’ during his surprise visit to his dad’s birthday in 2020, Bobrisky said “You don’t expect me to glam up early morning to surprise my dad..I was on jalamia….I didn’t want to steal the shine on his birthday cos he deserves the attention.”

The crossdresser further stated that “If you say money is not everything you are lying to yourself, money is everything…if you want to get a good name, is it not with money?”

KanyiDaily recalls that Bobrisky had taken to social media to reveal that he’s an exclusive prostitute who sleeps with only billionaires for money.