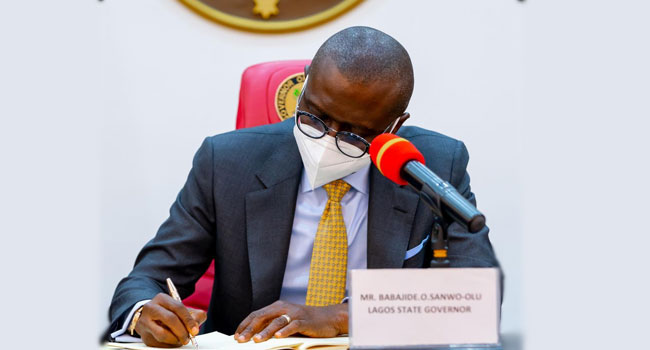 This was part of the provisions of the bill titled “Prohibiting Open Cattle Grazing and Trespass of Cattle on Land” signed into law by Governor Sanwo-Olu, on Monday.

At the event, Sanwo Olu said, “By the powers vested in me as the Governor of Lagos State, I am signing the bill on Open Cattle Grazing and Trespass of Cattle on Land into law to prohibit issues associated with open grazing of livestock.”

The law, among others, provides that all impounded cattle must be reported to the court, while a person who sells or transfer any leased land to a cattle herder for enclosed grazing in the state shall be liable on conviction to a term of five years in prison or a fine of N10m.

“Any person found to be in possession of firearms while herding cattle commits an offence and is liable on conviction to 21 years in prison.

“Any person found to be in possession of a dangerous weapon or object with intent to wound or cause grievous bodily harm to another person while herding cattle commits an offence and is liable on conviction to a term of 14 years in prison,” law partly reads.

The law also provides for the establishment of cattle pounds in strategic places in the state where impounded cattle would be until they were reclaimed by their owners or disposed of by the state through the Ministry of Agriculture.

“Sections 7 of the Bill provides for the Establishment of taskforce on cattle trespass. The taskforce shall have units located at every cattle pound established in the state. Officers of the Ministry of Agriculture and Law enforcement agents in the state are to work together to enforce the provisions of this law,” the law reads.

KanyiDaily recalls that Ebonyi State Governor, David Umahi had declared that armed herdsmen terrorizing, killing people and raping women in the south-east would be treated as terrorists.