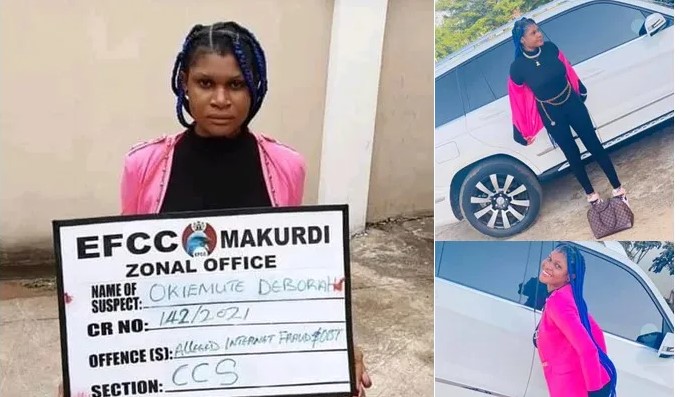 KanyiDaily had reported how Deborah, a Benue State University graduate, was arrested in May shortly after bragging and flaunting her flashy car on Facebook.

The graduate was jailed on Thursday after she was arraigned by the Economic and Financial Crimes Commission (EFCC) for offenses bordering on impersonation and internet fraud.

The charge against Deborah read, “That you, Deborah Okiemute, sometime in November 2020, at Makurdi, within the jurisdiction of this Honourable Court, did by concealment retain the control of the sum of Four Hundred and Seventy-One Thousand Naira (N471,000.00) only, in account No. 0102333502, domiciled in Access Bank Plc belonging to you, being the proceeds of a criminal conduct on behalf of one Nelson Irobo, knowing that the money is as a result of criminal conduct by the said Nelson Irobo and thereby committed an offence contrary to Section 17(a) of the Economic and Financial Crimes Commission (Establishment) Act, 2004 and punishable under Section 17(b) of the same Act”.

The EFCC said the defendant pleaded ‘guilty’ to her charges and the prosecuting counsel, Mary Onoja, reviewed the facts of the case and tendered documents printed from her email addresses, iPhones and laptops, as well as her statements, which were admitted in evidence.

Delivering judgment, Justice Obiora said “from the totality of the evidence placed before the Court, the plea of guilt entered by the defendant as well as her statement where she confessed to the crime, the Court believes that the prosecution has proved its case beyond reasonable doubt”

Justice Obiora sentenced Deborah Okiemute to three-year imprisonment with an option of fine of N100, 000.00 (One Hundred Thousand Naira) Only.

KanyiDaily had also reported how the EFCC arrested a young lady, Precious Iwuji for allegedly selling her photographs and Facebook account to internet fraudsters in the Sabo area of Kaduna State.