Pastor Richard Ato Davidson has been dragged to court for sucking sperm from the penises of 3 boys for ritual. 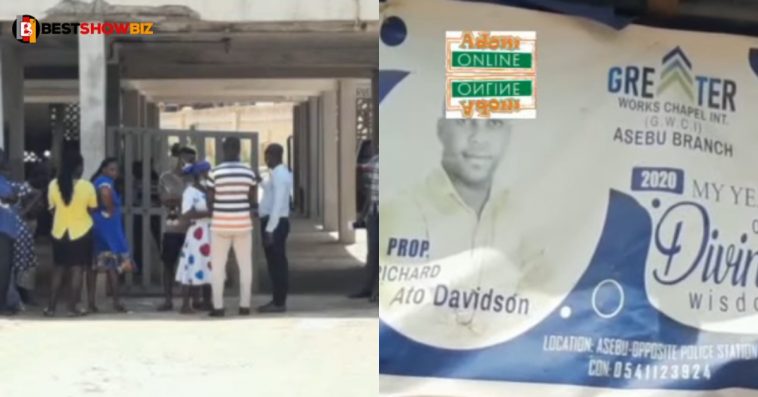 Police have arraigned one prophet Richard Ato Davidson, the founder and leader of Wise Chapel International at Asebu in the Abura Asebu Kwamakese District of the Central Region, Ghana.

Prophet Richard Ato Davidson was arrested by the police and dragged before the Cape Coast Magistrate Court 2, for allegedly sucking the penis of three teenage boys and using their sperms for ritual purposes.

According to Adom News, the suspect lured his victims aged between 16 and 21 to hotel rooms in the name of deliverance over claims that they are being tormented by evil spirits in their family.

Upon arrival at the hotel, Prophet Davidson was said to have stripped the victims naked amid chants and lit candles of different colours.

The man of God then proceeded to allegedly having oral sex with the victims before sucking their penis and using a white cloth to absorb the sperms.

Assembly Member for Asebu Amantendo Electoral Area, Richard Mbea, who confirmed the incident, said that his SHS nephew was one of the victims of the alleged sexual assault.

Mr. Mbea said that his nephew told them what happened after he started urinating blood, adding that several teenagers have lodged similar complaints against the suspect with the police.

During the hearing, the court presided over by her worship Bernice Mensimah Ackon charged prophet Davidson with indecent assault contrary to section 103(2) of the Criminal Offences Act, 1960 (Act 29)

He has however been granted court bail with two sureties and is expected to reappear on 19th October 2021.

Mr Mbea, after the court proceeding, disclosed that they will compile the list of all the teenagers who lodged similar complaints against the suspect and make it available during the next hearing.

KanyiDaily had also reported how a pastor impregnated a 21-year-old girl after telling her that his sperm was holy and would bring positive results to her life.