Governor David Umahi has revealed why Ebonyi State will never join the South-East to agitate of Biafra. 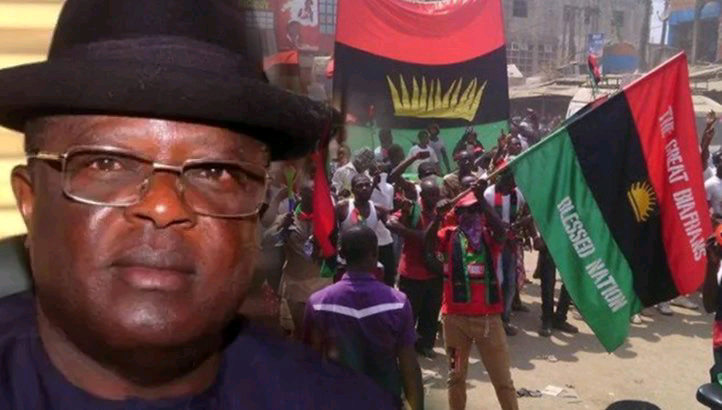 Ebonyi State Governor, David Umahi said that the marginalization and slavery of his people by other Igbos is the reason why they will never be part of Biafra.

Umahi stated this during the signing of the second phase of contracts for Ebonyi State ring roads project that took place at the new government House, Centenary City, Abakaliki.

He vowed to hold council chairmen, traditional rulers accountable over ongoing killings within their localities if they can’t identify the youths who are perpetrating the crimes in the state.

READ:  Nigerian Man Offers His Wife N50m To Divorce Him So He Can Marry A Younger Lady

The governor, however, said his government was ready to suspend all projects and empower the bandits, if they could lay down their arms, even as he warned that his administration would not tolerate further killings, saying, “no more killings in Ebonyi State.”

He said, “Let me warn all the local government council chairmen, traditional rulers, development centre coordinators and parents that henceforth, they would be held responsible for any killing in the state.

“No innocent Ebonyi citizen would be killed, no more. Anybody that attempts that would end up in jail.”

Umahi further called on everybody in the state to collaborate efforts with security agencies to ensure permanent peace in the state.

Ebonyi Will Never Be Part Of Biafra – Umahi

Umahi, who is the chairman of the South-East Governors’ Forum, also reacted angrily to allegations that Ebonyi indigenes were responsible for the killings and fatal attacks that is ravaging Anambra State.

He described the allegation as false, adding, “if any Ebonyi person is caught in killing, that person should be killed too.”

The governor said the killings in Anambra were political and had no link with Ebonyi people.

Umahi said criminals who were from other states in the South-East zone had been arrested for the killings and other heinous crimes in Ebonyi, without announcing their states of origin. He wondered why other people derive joy in tarnishing the image of Ebonyi people.

KanyiDaily recalls that Nnamdi Kanu had said that the President Buhari-led All Progressive Congress (APC) government led to IPOB’s agitation for the Sovereign State of Biafra.