A Nigerian lady, Nancy Chidera has apologized to Nollywood actress, Mercy Johnson, who she accused of causing problems at her daughter’s school. 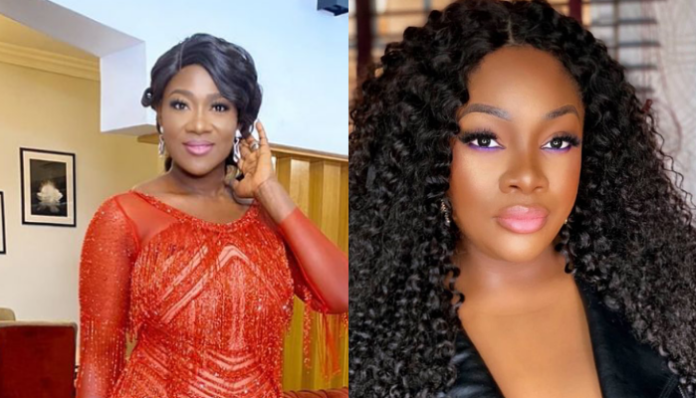 Chidera Nancy had accused Mercy Johnson of assaulting a headteacher with thugs after her 8-year-old daughter, Purity, was corrected for fighting another child at Chrisland School, Victoria Garden City, Lagos State.

Nancy alleged that Mercy’s daughter twisted a fellow student’s hand and the teacher called both students to reconcile them but the actress came to school the following day to confront the teacher about it.

According to Nancy, Mercy “instigates” her daughter to “fight and cause havoc in her new school” and has trained her child to be “a tyrant”.

The lady also alleged that Purity was sent out of her former school because of Mercy’s “dememtal attitude” and because she didn’t “train” her daughter well.

Nancy said the actress brought the “stupid character” to her daughter’s new school and called her husband who came with three bodyguards to fight the teacher.

READ:  How I Handled Rαpe Allegation Made Against Me By Kambili Korie - Uti Nwachukwu

In a now-viral video, the lady openly apologized to Mercy, saying her initial post was because she was misinformed and had no first-hand details of what transpired.

She said, “The events of the past few hours have been very traumatizing for me and I just came on here to apologise to Mercy Johnson Okojie. I was misinformed and I didn’t have first-hand information of everything.”

“I believe what I saw over what may have transpired before I got there. So, I based my judgment on that. I’m very sorry for whatever issues I may have caused her family and whatever trauma I may have caused them through at the end of today, I really hope she finds it in her heart to forgive me.”

READ:  I Was Almost Accused Of Stealing In London Hotel Because Of Simon Leviev - Bovi

The lady also claimed that she had been getting death threats since she made the post while pleading with fans of the actress to forgive her.

She added, “I’ve been receiving several death threats in the past hours and it’s disturbing to me, so I came here to apologise to everyone.”

“I have great love for Mercy and I will never wish her or her children bad. Next time, I would be more informed before making comments.”

KanyiDaily recalls that Mercy Johnson-Okojie has come under serious verbal attack from her colleagues in Nollywood – Sonia Ogiri and Angela Okorie – who accused her of being hateful, mean, evil and a witch.