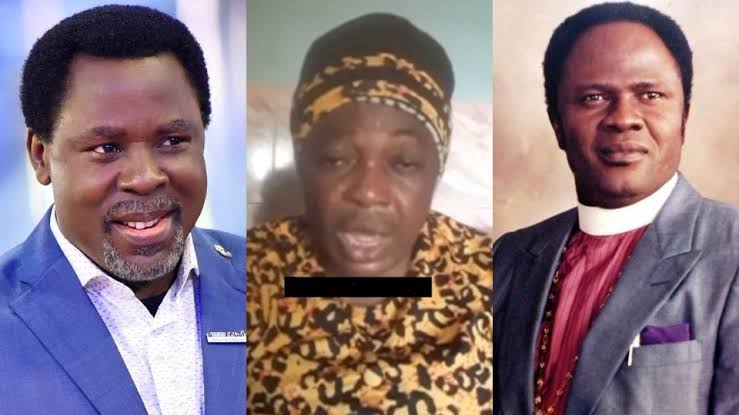 In a video that has gone viral on social media, the woman claimed that she saw the two popular men of God being tormented and languishing in “hellfire.”

According to her, Bishop Idahosa was allegedly sent to hellfire for allowing his church members to adorn themselves with jewellery.

The female preacher said the late Bishop also allowed his church members to wed each other with rings and to were chains without knowing it will lead him to hellfire.

READ:  UNILAG Lecturer Settles Quarrel Between Student And His Girlfriend In Class [Video]

She said, “I saw TB Joshua’s body in hell. Idahosa is tormented in hell today because of the ring, for allowing his members to put on those adornments. Because he himself was putting a long chain, he didn’t know.

“I’m sorry to tell you that bishop Idahosa is in hellfire. He is crying, he is been tormented. He is putting on a long chain.”

She went forward to advise other ministers of the gospel not to wear rings or wed their members with a ring as the end result will lead to hell.

“If you are a pastor run away from the ring, don’t allow your church member to put on rings, don’t wed them with rings. I am telling you the truth,” she said.

Woman Breaks Eggs At Riverside, Rain Curses On Cousin Who Lied Against Her [Video]