Imo State Governor, Hope Uzodinma has asked his predecessor, Rochas Okorocha, to stop raising false alarm over the arrest of his son-in-law,  Uche Nwosu, who was a former governorship candidate of Action Alliance (AA) in the state. 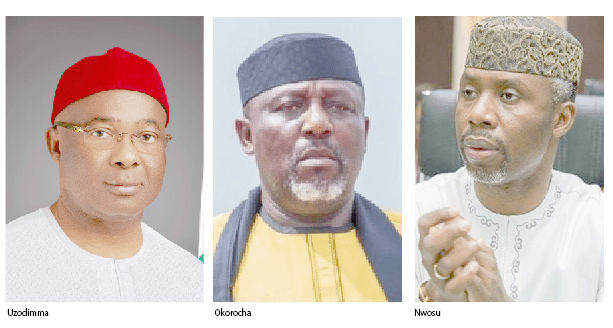 Speaking with journalists on Sunday, Okorocha accused the police of humiliating his wife, Nneoma, by pushing her down and tearing the clothes of his daughter, Uloma Nwosu, in public.

The Senator, who also accused Governor Uzodimma of being behind the arrest,  lamented that there was no arrest warrant or invitation by the policemen who arrested his son-in-law.

Reacting to Okorocha’s statement, Uzodinma said the former governor was panicking over Nwosu’s arrest because he looted the wealth of the people of Imo State.

The governor, who addressed reporters at the Government House in Owerri, through the Commissioner for Information and Strategy, Declan Emelumba, said Okorocha’s reaction was incoherent as he should have waited for the law to take its course before reacting.

Uzodinma said, “All he wants to do is to whip up sentiment among Imo citizens, but he has failed.

“If Uche Nwosu is arrested, what he (Okorocha) should do is for him to wait and see why he is arrested.

“But he is talking inconherently, and that will not save him. What he should do is to wait for the law to take its course.

“All of you went to Orsu and saw the carnage there. I am not saying he is linked to the incident.

“You also witnessed his statement during his mother-in-law’s burial where he invited the youths to protest. All these are evidence of his incitements in the state

“The government has no hand in the arrest of Uche Nwosu, but any attempt by Okorocha to use it to cause panic is evidence of guilt and that cannot save him.

“Okorocha has contradicted himself when he said that the commissioner of police told him that the order came from the Inspector-General of Police and at the time he said that the arrest was ordered by the governor.

“This shows that he is speaking inconherently and that cannot save him.”

READ:  Amaechi And Akpabio Reconciles In Abuja After Several Years Of Political Conflict