A 20-year-old jilted lady, Courtney Ireland-Ainsworth has been sentenced to jail after the police unravelled her “web of poisonous deceit” to get her innocent ex-boyfriend imprisoned in the United Kingdom. 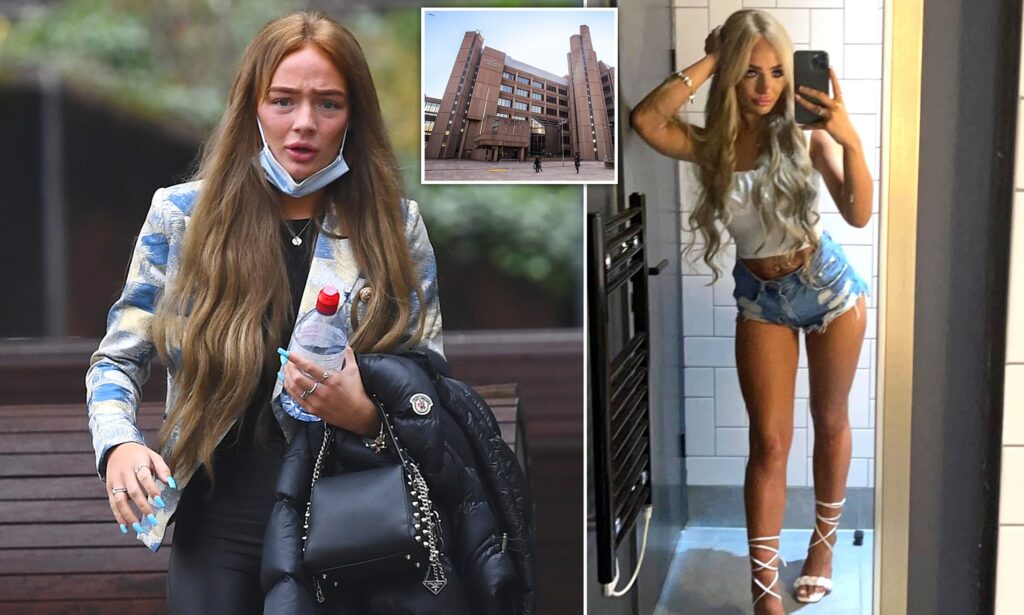 Courtney Ireland-Ainsworth And Her Web Of Lies

The young lady created up to 30 fake Instagram profiles, then told police her 22-year-old ex-boyfriend, Louis Jolly, was behind ‘vile’ messages that she said had been sent to her.

Ainsworth, a DHL worker who was 19 at the time, told the police that Jolly was threatening to stab her and warning: “She is getting a f***ing blade in her chest.”

She made 10 police statements claiming Jolly was harassing and stalking her, leading to him being arrested six times and spending 81 hours in custody, including being remanded overnight.

Jolly was arrested six times, charged with assault and stalking, hit with a stalking protection order, bailed on a home curfew with an electronic tag, and even lost his job.

The boyfriend said they were together for two years but split up on ‘okay terms’ in October 2019, before Ainsworth started seeing another man called Declan Rice.

Ainsworth then began her “deliberate and malevolent lies” by sending herself threats from a fake Instagram account to try and get the innocent man sent to jail.

Prosecuting lawyer, Paul Blasbery said the 20-year-old lady made numerous calls to police from July 15 to December 13, 2020, and provided screenshots of messages and the names of Instagram accounts which she claimed came from Jolly.

Ainsworth even accused him of breaching his electronically tagged home curfew, which applied between 7 pm and 7 am daily, and her mother called police on December 13 to report this.

However, when police received the data from Facebook, it showed at least 17 Instagram accounts created using two of Ainsworth’s email addresses and IP addresses connected to her home and mobile phone.

Jolly protested his innocence all through police interviews, leaving him feeling suicidal as he was investigated for four months until the charges were dropped when Ainsworth finally confessed.

In a victim impact statement, the young man said: “At my lowest point I felt like life wasn’t worth living and thought to myself that I’d be better off dead.”

Recorder Ian Harris told Ainsworth he was going to send her to prison, as she started crying in the dock. He said her allegations ‘all of them untrue’ had an ‘absolutely shattering effect’ on the victim and his family.

The judge said: “You created an entirely fictional but superficially credible web of poisonous deceit for over five months. He’s become a shell of the man he used to be.’

“You in my judgement involved your boyfriend Declan Rice and your mother and grandmother in making statements to the police… you involved them in your dishonesty.’

READ:  Dallas Domestic Violence Survivor Awarded $40million After Her Boyfriend Tortured Her For Five Hours And Left Her For Dead

‘You had made a catalogue of assertions in order to get Mr Jolly into serious trouble – calculated to lead to criminal sanctions and a loss of his liberty.

“I find a lot of thought and planning went into this criminal enterprise, which had hallmarks of sophistication and cunning about it.

“Even after you were arrested and charged, you continued to make derogatory assertions against Mr Jolly.’

“In the pre-sentence report you admitted messaging yourself from 20 to 30 fake Instagram accounts that you set up.

“You said, I quote, “you wanted to hurt Mr Jolly and you didn’t see that your actions were selfish”.

“You persisted in deliberate and malevolent lies for five months. You wasted police time and resources…

“You caused untold emotional harm to a completely innocent man and his family. He suffered anguish for months.”

Recorder Harris reduced Ainsworth’s sentence because of her mental health difficulties and gave her full credit for her guilty plea.

He jailed her up for 10 months and gave her a 10-year restraining order, adding: “I extend considerable sympathy to the Jolly family for what they have had to suffer at your hands.”

Meanwhile, a young lady identified as Sthembile Ngwenya has taken to social media to reveal why she visits her late boyfriend’s grave every year to spit on it.

Man Arrested For Killing His 3 Children, Dumping Their Bodies Inside Fridge In Enugu