A female prisoner has confessed that a police officer allowed her to escape after giving him four rounds of sex. 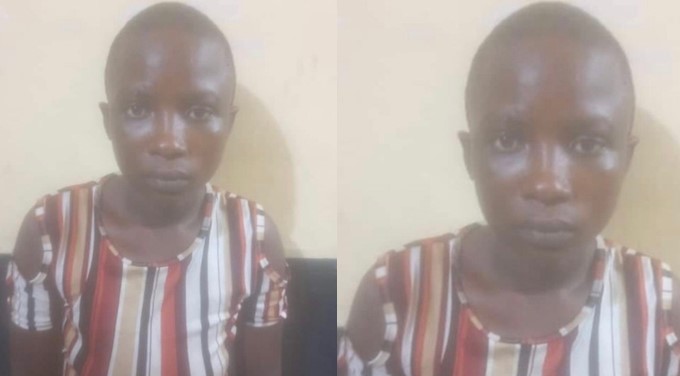 A police Lance Corporal, Isaac Apomah has been arrested for allegedly having sex with a female suspect, Theresa Forson, and freeing her without due process in Nkafoa, Central Region, Ghana.

It was gathered that the 27-year-old suspect was earlier convicted in a theft case and was in police custody before the 36-year-old officer released her after she gave in to his demand for sex on Saturday.

Presenting a case against the randy officer before a court on Monday, Assistant Superintendent of Police (ASP), Daniel Mensah disclosed that Miss Forson has narrated how L/Cpl Apomah helped her escape after giving him four rounds of sex at the Nkanfoa Police Station.

He said around midnight, L/Cpl Apomah brought four sachets of ‘Abe Nsuo’ also called “One Show”, to the station and gave the plaintiff, who was at the time, a prisoner on remand at the station, two sachets to drink which she drank.

Around 3 am, L/Cpl Apomah while having a conversation with Miss Forson, told her that the detective handling her case was troublesome and that he could let her go scot-free if she would allow him to sleep with her.

Miss Forson reportedly agreed to the deal and had sexual intercourse with L/Cpl Apomah, after which he opened up the cells for her to have her bath.

ASP Mensah said; “Apomah then gathered Ms Forson’s items, which were being kept in police custody, including a mobile phone, and put them at the entrance of the police station and signaled her to run away.”

READ:  Nigerian Traders Says They're Ready To Return Home Over Demand Of $1 Million Tax In Ghana

Unfortunately for L/Cpl Apomah, Miss Forson went to her father-in-law and narrated what transpired after she arrived at her family home.

Forson’s family were said to have brought her back to the Nkanfoa Police Station to avoid being in trouble with the law and authorities.

Meanwhile, L/Cpl Apomah was arrested and charged with rape and aiding the escape of a convict. He is to appear before the court on October 12.

KanyiDailyhad also reported how a female warder was caught on camera having sex with a male inmate in an office at the prison in KwaZulu-Natal, South Africa.