The House of Representatives has asked the Nigerian National Petroleum Company (NNPC) to suspend the four companies involved in the importation of adulterated fuel. 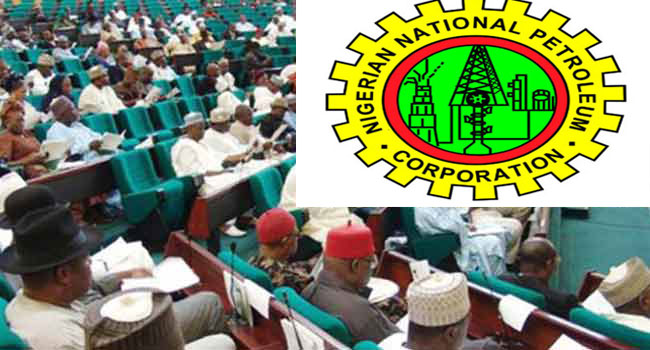 KanyiDaily recalls that the NNPC had earlier named MRS, Emadeb Consortium, Oando, and Duke Oil as the four oil companies that imported the contaminated fuel into the country.

NNPC said the adulterated fuel was imported by the four companies from Antwerp in Belgium with quality inspectors failing to detect the high level of Methanol it contained, first at the point of import in Belgium and later at the point of arrival in Nigeria.

The company explained that the contaminated PMS was not detected because the quality checks do not include checks for Methanol percentage, adding that cargoes quality certificates issued at load port (Antwerp-Belgium) by AmSpec Belgium indicate that the gasoline complied with Nigerian Specification.

The adulterated petrol has damaged vehicles of an unknown number of citizens and companies, with long queues at fuel stations in Abuja, Lagos, and some parts of the country.

During the plenary session on Thursday, the lower legislative chamber asked the NNPC to provide the names of the companies to its committee for investigation.

The resolution seeking the suspension of the erring companies was passed following the adoption of a motion of urgent public importance sponsored by Mohammed Monguno.

Contributing to the motion, Onofiok Luke, a lawmaker from Akwa Ibom state, said NNPC Limited should be held responsible for the importation of adulterated fuel. He asked the parliament to take action on the matter to ensure and restore the confidence of Nigerians.

The Deputy Minority Leader, Toby Okechukwu said the NNPC limited has not done due diligence in its duty as a regulatory agency (sic). He said the parliament had conducted several investigations on the infraction committed by the NNPC limited.

He said, “What we have seen is that this parliament has been hired by NNPC to work for it. So many investigations have been carried out by the parliament. The due diligence to import appropriate petroleum products has become a war.”

The legislator said Nigerians that have fallen victims to the adulterated products should be compensated, adding that NNPC and its agencies which have not been contributing to the federation account has failed in their purpose.

The motion was unanimously adopted when it was put to a voice vote by Idris Wase, deputy speaker of the house.

The lawmakers subsequently mandated its “committee on petroleum downstream to ascertain whether the Nigerian specification concerning importation, distribution and dispensing of the alleged toxic petrol in Nigeria from January till date complies with international standards”.

They also asked the committee to “investigate the roles played by the NNPC limited, Standard Organisation of Nigeria (SON), Nigeria Customs Service (NCS), Nigerian navy, any other government regulatory agencies, limited liabilities companies and individuals in the unfortunate episode”.

KanyiDaily recalls that NNPC had recently disclosed that in the 12 months of 2021, a total of N100 billion was spent on the rehabilitation of Nigerian refineries.