Anambra State Governor, Charles Soludo has made his first three appointments less than six hours after his inauguration as the sixth governor of the state. A statement on Thursday by the governor’s media aide, Joe Anatune, announced the appointment of Prof. Osita Chukwulobelu, as Secretary to the State Government (SSG) and Chukwudi Okoli as the Accountant General (AG), while Chinedu Nwoye has been appointed as the deputy chief of staff/state chief of protocol.

KanyiDaily recalls that Soludo was sworn-in earlier on Thursday in a low-key ceremony in Awka, and he promised to roll out his list of commissioners within one week.

He said, “Today is my first day at work. I just reported for duty and will work for at least eight hours. We had more than a month since the election to celebrate our historic victory. Now is the time to work, and there is no minute or kobo to waste in fanfare.

“In a few minutes, I will announce some of the principal officers of the administration, and commence with serious meetings of the Anambra State Security Council, followed by a meeting with the permanent secretaries, a meeting on Okpoko, and with my Strategy, Execution and Evaluation team.

“Within the next one week, the list of commissioners will be laid before the House of Assembly.”

Meanwhile, the Economic and Financial Crimes Commission (EFCC) has arrested the immediate past governor of Anambra, Willie Obiano hours after handing over to Soludo. 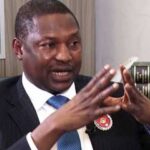 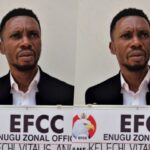