The ruling All Progressives Congress (APC) has reacting to the outrage trailing the prices of its nomination forms and expression of interest for the 2023 general election.

KanyiDaily recalls that the APC had tagged the price of the 2923 presidential ticket for N100 million, the most expensive in Nigeria’s history and the highest among the political parties.

Reacting to the criticism from members of the public who has put the party in a spotlight, APC spokesperson, Felix Morka said any aspirant that can’t raise N100m shouldn’t be aspiring to be president.

Morka, who spoke on Monday during a programme on Silverbird Television, said although the price appears high for Nigerians, presidential aspirants should have the necessary support to raise such an amount.

He said, “I hate to use the US as an example. The ability to raise funds is a clear criterion whether or not you are eligible to participate at the primaries and the debate especially.

“You aspire to run for the highest office in the land, you should have some appeal, some reach to members of the party. Sell your ideas, sell your vision. Forty-five million people giving you N1, do the math and see what it comes to. That is a lot of money. We do have that possibility.

“But for those who have the money already, they are quite welcome to use their own funds. The party has commitments and we do not have any statutory funding as you know.

“Within the context of Nigeria, N100 million is a lot of money. Those who seek the office around the country are expected to have a sufficient base, otherwise why would you aspire to be president, if you are that obscure or unsupportable by your party members and the electorate?”

KanyiDaily recalls that popular singer, Naira Marley had asked Nigerians if they would vote for him, if he gets the form to run for president in 2023. 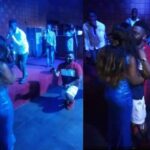