The billionaire founder of Tesla and SpaceX, Elon Musk has sparked a huge buzz on social media after he shared a disturbing post about dying under mysterious circumstances. Elon Musk Warns He May Die

Musk, the world’s richest person who recently bought Twitter for $44 billion, has warned that he may ‘die under mysterious circumstances’ after threats from Russian officials.

He wrote: “If I die under mysterious circumstances, it’s been nice knowin ya.”

If I die under mysterious circumstances, it’s been nice knowin ya

READ:  PHOTO Of The Day: NEPA/PHCN Are You Seeing This?

He made the tweet just an hour before he shared a post that seems to be a conversation with a Russian officer, who said the Tesla CEO is involved in “supplying the fascist forces in Ukraine with military communication equipment”.

“According to our information, the delivery of the Starink equipment was carried out by the Pentagon…,” the message read. “And for this, Elon, you will be held accountable like an adult – no matter how much you’ll play the fool.”

The word “Nazi” doesn’t mean what he seems to think it does pic.twitter.com/pk9SQhBOsG

READ:  Court Awards N4m To Man Who Was Tortured After He Caught Policeman Sleeping With His Wife

Thank you for the blessing, but I’m ok with going to hell, if that is indeed my destination, since the vast majority of all humans ever born will be there.

The billionaire’s mother, Maye Musk, also took to Twitter to say the tweet is “not funny”, to which, Musk apologized and said he will try his best to stay alive.

Sorry! I will do my best to stay alive.

KanyiDaily recalls that In March, Elon Musk had announced that his company’s Starlink satellites have been activated in Ukraine amid the ongoing Russian military invasion. 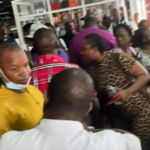 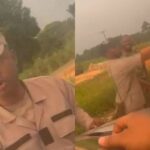