The General Overseer of the Citadel Global Community Church, Pastor Tunde Bakare has officially declared his intention to contest for the 2023 presidency on the platform of the ruling All Progressives Congress (APC). The cleric declared his bid in Abuja on Monday, a few days after he obtained the N100 million presidential expression of interest and nomination forms of the ruling APC.

Speaking at his presidential declaration, Bakare said he is committed to the realization of a new Nigeria as he categorized his agenda into four – namely peace, progress, prosperity, and possibilities.

The lawyer said if elected president he will triple Nigeria’s gross domestic product (GDP) to $1.5 trillion from the current $432.293 billion by 2030.

Bakare said with private sector partnership he will reinvigorate the power sector, adding that his administration will generate more than 100,00MW by 2030. He also promised to construct a 3000km super highway that will transform the country’s transportation system.

He said, “We will rebuild Nigeria’s economy around six competitive geo-economic zones, triple Nigeria’s GDP to $1.5 trillion by the year 2030. We will industrialise Nigeria.

“Through public-private partnership, please hold me accountable for this, we will build a 10-lane 3,000km north-south super highway, which will be systematically linked to regional ways and subway feeding each geo-economic zone.

“We will execute a private sector driven electricity reform agenda that will see the generation of up to 100,000MW of on grid and off grid electricity by 2030.

Bakare said he will vitalise the not-too-young-to-run act by establishing a youth presidential programe that will prepare young Nigerians for office.

He said his administration will be known for his intergenerational cabinet, adding that women will be given more than 35 percent representation.

Bakare said, “The youths of Nigeria will no longer be left out of leadership in the country. My cabinet will be one of the most intergenerational in Nigeria history.

“And my administration will vilatise the not-too-young-to-run act by instituting a presidential young leaders programme that will attract, train, mentor, appoint and back young Nigerian men and women for office.

“Fellow Nigerians, government will become more mobile and will be close to you.

“Under the progress, we will alleviate poverty in the shortest time by offering safety net to our most vulnerable, while implementing long term policy for poverty eradication.

“We will launch EIN agenda, the educate, industrialise Nigeria, which will see a productive linkage between academia and industry clusters in each geo-economic zone. We will ensure we meet women representation that meets and surpasses the 35% recommendation of the national gender policy in public sector appointment.

“I’m committed to the realisation of the new Nigeria for everyone in my life time. This is why I’m formally announcing that I’m running for the office of the president of Nigeria.

“I’ll respect the separation of powers, while providing presidential backing to legislative agendas, and as the constitution permits the president.

“I’ll also respect the rule of law, and the independence of the judiciary. To act above the law will be beneath my office and will be a betrayal of my training as a lawyer.”

KanyiDaily recalls that Pastor Tunde Bakare had declared that he would be Nigeria’s next president because he’s destined to succeed the current leader, Muhammadu Buhari. 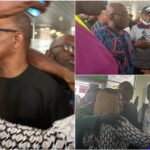