Osun State Operatives of the Western Nigeria Security Network Agency, codenamed ‘Amotekun Corps‘ has arrested two suspected cultists for allegedly gαng-rαping a 17-year-old girl and filming her during the act. 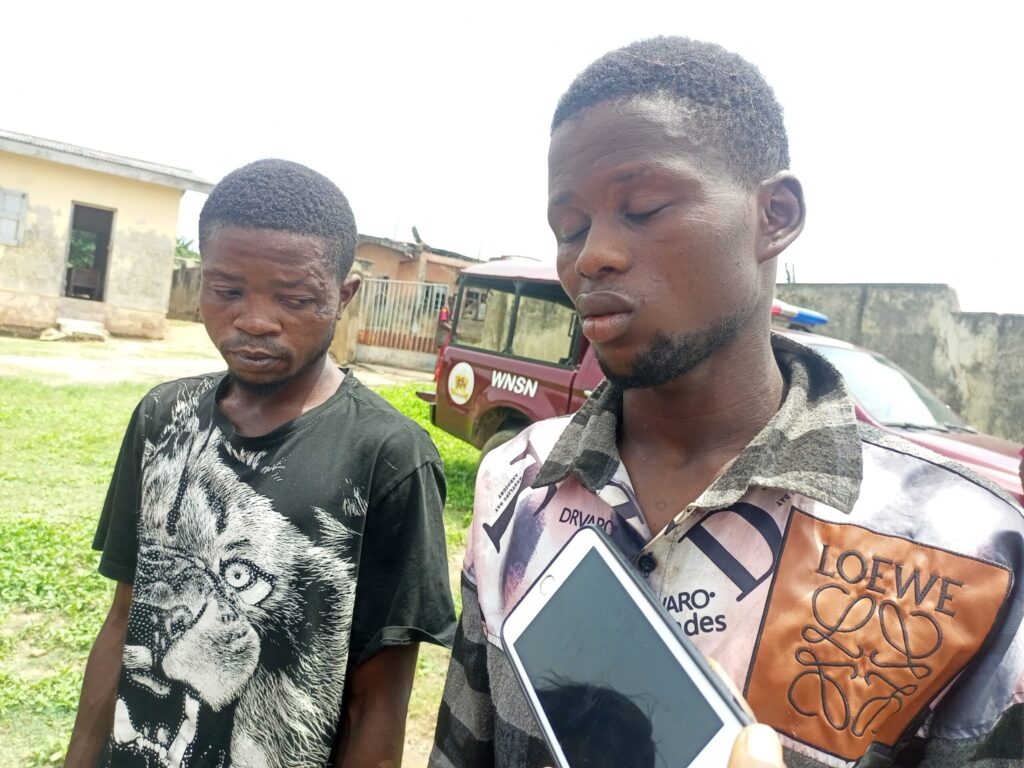 The suspects, Olamilekan Elijah, aged 23, and his friend, Afeez Adegoroye 24, were alleged to be members of a secret Buccaneer, Alora Confraternity.

Field Commandant of Amotekun in the state, Comrade Amitolu Shittu said the suspects filmed themselves while rαping the victim, who was on her menstrual cycle, then threatened to release the video should the lady reveal the secret.

Shittu explained that the case was reported on the 14th of May 2022 at Iwo Command, and men of the operatives swung into action to bring the suspects out.

“Olamilekan Elijah is from Ola-Ejigbo while Adegoroye Afeez is from Oba’s compound, Bode-osi. The victim, an apprentice at Iwo, living in the Oke Bode area of the community was lured to the house of one of the suspects, Adegoroye Afeez.

“The 17-year-old girl was raped by the two suspects and filmed. The suspects threatened the victim that the video recording will be released on social media if she should inform anybody of what transpired.

“Our investigations revealed to us that the two suspects are members of the Buccaners confraternity otherwise known as ‘Alora.’,” Shittu said.

One of the suspect, Afeez, who claimed to be a cocoa seller, confessed to the crime, adding that he raped the victim because she rejected his sexual advances.

“I’m a cocoa seller from Iwo. I am married and have a child. I have known the victim since last year and we have since been in a relationship. I raped her because she would not give consent to my sexual demand on the fated day.

“That was our first time in the suchlike act. My friend and I were in the house, but he didn’t partake in the act,” Afeez said.

He also denied not knowing that the victim was in her menstrual period.

On his part, Olamilekan denied raping the victim but admitted to filming the act.

He said, “I am also a cocoa seller and married with a child. I did not partake in the act. She is the girlfriend of Brother Afeez. We both rented the room. When she came, I was outside to put the generator set on.

“I later came into the room and met them discussing. Soon, an argument ensued between the two as to sexual advances. In this time I was only making a video of myself.

“The girl hit my phone on the ground during the struggle and I held her hands. This was the time Brother Afeez penetrated her. I did not partake in it, but I did record the act on my phone. I merely recorded her to teach her a lesson.”

The two suspected also admitted to being members of Alora confraternities and had joined the cult group at Igbajo Polytechnic.

KanyiDaily had also reported how five boys invited two girls to their house and they took turns to gang-rαpe these two girls, then proceed to post videos on the internet.

“Help Me!!!” – Policewoman Screams After Entering Man’s Car And He Began Driving Her To An Unknown Location (Video)