The National Chairman of the All Progressives Congress (APC), Abdullahi Adamu said the party may punish the National Leader of the party, Bola Tinubu, for “insulting” President Muhammadu Buhari. 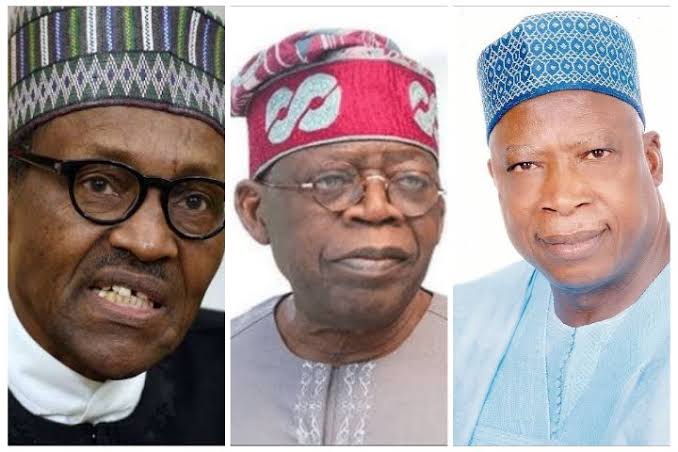 APC To Punish Tinubu Over Outburst Against Buhari

KanyiDaily recalls that during the meeting with APC delegates on Thursday, the presidential hopeful had said without him, Buhari would have lost the 2015 presidential election.

Tinubu recalled how Buhari had, out of frustration, broken down in tears on television, declaring he was done trying to become President after failing for the third time, but he traveled to Katsina and convinced him to contest again with his support.

The APC chieftain’s comment has continued to elicit intense reactions among Nigerians on social media with some people accusing him of disrespecting the president.

Reacting while addressing newsmen at the APC headquarters in Abuja on Saturday, Adamu said that Tinubu’s outburst was unbecoming of a leader of his stature, adding that the party found his latest attack on the president insulting.

The APC national chairman said, “We are saddened by what we saw in the video and pray we don’t see such again. I, as Chairman of this party, have a duty to stand by Mr President.

“Tinubu went as far as saying how Gen Muhammadu Buhari went to him, citing instances of even prostrating in tears begging him to endorse him and to support him for the presidency. He claimed Buhari went to him.

“His utterances are very very insulting. It’s very very unbecoming for a person of that standing to do what he did to the sitting president of the Federal Republic of Nigeria, the President produced by the votes of the APC.

“Though the president says he belongs to everybody. It is amazing how a fellow APC person would make that kind of comment in that kind of circumstances about the president. We take exception to this. It has shown that he does not show any appreciable level of respect for the office of Mr President.

READ:  APC Youths Attack Kwankwaso In Kogi, Haul Sachets Of Water And Stones At Him

“Therefore we want to make it public that we are saddened by what we saw in the video, in that reportàge and we condemn it in the strongest of terms. We do hope that he would never say that kind of again, particularly of the APC extraction to make such kinds of comments.

“Yes, yesterday we saw some part of a retraction but that effort is not adequate. It is not sincere. It is not in-depth enough. It doesn’t wipe out the impression that that event has left in our minds.”

When asked if the APC would punish the national leader, Adamu said, “If there is a need to punish any member of a party, not just Tinubu, we will bring it to the party’s book. But we are watching.”

Meanwhile, Bola Tinubu has expressed high respect for President Muhammadu Buhari, insisting that his comments on about the president were misinterpreted.