Catholic Diocese of Ondo has denied reports that one of its priests was abducted by the terrorist during Sunday mass at St. Francis Catholic Church in Owo on Sunday.

Speaking with BBC Yoruba after the incident, Rev Father Andrew Abayomi, a priest at St. Francis Catholic Church in Owo, narrated how he survived the church attack on Sunday.

He said, “We were about to round off service. I had even asked people to start leaving, then we started hearing gunshots coming from different angles.”

“We hid inside the church but some people had left when the attack happened. We locked ourselves in the church for 20 minutes. When we heard that they had left, we opened the church and rushed the victims to the hospital.”

There were reports that Father Abayomi, the officiating priest, was kidnapped in the incident which happened at about noon when the mass had almost ended.

But a statement by the Director of Social Communications of the church, Rev Augustine Ikwu said that contrary to the reports, Fr. Abayomi was safe and no priest was kidnapped.

The statement reads, “It is Pentecost Sunday when every Catholic is expected to be in Church to commemorate the Solemnity.

“It is so sad to say that while the Holy Mass was going on, unknown Gunmen attacked St. Francis Catholic Church, Owo, Ondo State. Leaving many feared dead and many others injured and the Church violated.

“The identity of the perpetrators remains unknow while the situation has left the community devastated.

“However, for now, security agencies have been deployed to the community to relatively handle the situation. At this point in the history of our dear country Nigeria, we need God’s ultimate intervention to restore peace and tranquillity.

READ:  Former NNPC Staff Gruesomely Murdered Like A Goat By His Friend Inside Farm In Kwara

“Meanwhile, all the Priests and Bishop in the parish are safe and non was kidnapped as the social media has it. Nonetheless, let us continue to pray for them and the good people of Owo and the state at large.

“We turn to God to console the families of those whose lives were lost to this distressing incident, and we pray for the departed souls to rest in peace. Amen.

“The Bishop appeals that we remain calm, be law abiding and pray for peace and normalcy to return to our community, state and country.”

Meanwhile, the Christian Association of Nigeria (CAN) has condemned the church attack and called on security agencies to apprehend the perpetrators of the dastardly criminality who he described as being “possessed and demonic”. 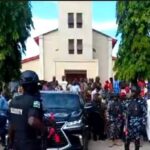