American model, Chrissy Teigen has taken to social media to announce that she’s expecting another child with her husband and musician, John Legend. Taking to her Instagram page on Wednesday, August 3, the mother of two shared a picture of her baby bump, saying that “the last few years have been a blur of emotions”.

She wrote, “The last few years have been a blur of emotions to say the least, but joy has filled our home and hearts again. 1 billion shots later (in the leg lately as you can see!), we have another on the way.

“Every appointment I’ve said to myself, ‘ok if it’s healthy today I’ll announce’ but then I breathe a sigh of relief to hear a heartbeat and decide I’m just too nervous still.

“I don’t think I’ll ever walk out of an appointment with more excitement than nerves but so far, everything is perfect and beautiful. And I’m feeling hopeful and amazing. Ok phew it’s been very hard keeping this in for so long.”

READ:  I Used To Underestimate Myself’ – Toke Makinwa On Grace And Moving On

KanyiDaily had also reported that American reality star, Kim Kardashian shared an intimate glimpse into her relationship with her boyfriend, Pete Davidson. 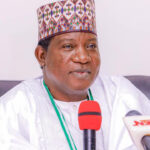