Barcelona striker, Pierre-Emerick Aubameyang and his wife, Alysha Behague were attacked by armed robbers who invaded their home in the early hours of Monday. Aubameyang And His Wife Attacked By Armed Robbers

It was gathered that four intruders climbed into the back garden of Aubameyang’s home in Barcelona and the footballer and his wife were forced to lie on the floor in front of their terrified children.

The 33-year-old Barcelona striker was threatened with firearms and iron bars, and was also beaten by the violent robbers, according to police sources reported by El Pais.

The thieves also intimidated Aubameyang’s wife with weapons until they managed to open a safe where the couple keep valuable items, including pieces of jewellery.

The armed robbers reportedly carted away jewels that were inside the safe before leaving the coupe with minor injuries and fleeing the house in a white Audi A3.

Aubameyang was struck on the chin by an iron bar, while Behague suffered a blow to the head, but the couple refused to attend hospital because they did not want to scare their children anymore.

It was gathered that Aubameyang and his wife have since submitted statements to local police who are now trying to identify and find the robbers.

A spokeswoman for Catalan police, the Mossos d’Esquadra, confirmed they were investigating a violent robbery in Castelldefels but refused to identify the victim, citing privacy rules.

“The investigation remains open and we are gathering information,” she told AFP.

KanyiDaily had also reported how former Tottenham football star, Dele Alli was battered by knife-wielding robbers who stole hundreds of thousands of pounds worth of valuables at his home in north London. 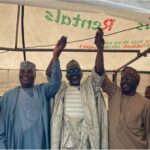