A Federal High Court in Minna, Niger State, has ordered the arrest and imprisonment of General Farouk Yahaya, the Chief of Army Staff, for alleged contempt. 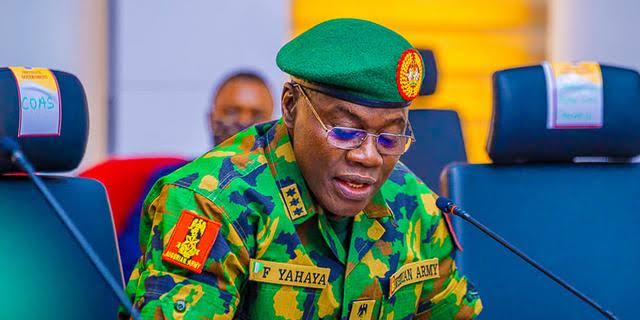 Justice Halima Abdulmalik, who issued the warrant and presided over the case, also ordered that the Commandant Training and Doctrine Command, Minna, Major General Olugbenga Olabanji, should be arrested and imprisoned for a similar offense.

The judge gave the order for the arrest of the top army officers at the resumed hearing of the case between Adamu Makama and 42 others versus the Executive Governor of Niger state and seven others in the suit NSHC/225/2019 in Minna.

The order was sequel to a motion on notice brought pursuant to order 42 rule 10 of the Niger State High Court (Civil Procedure) rule 2018 and under the inherent jurisdiction of this Honourable court moved by Mohammed Liman Esq Counsel to the plaintiffs/ Applicants.

Mohammed Liman had prayed the court to commute the Chief of Army Staff (General Farouk Yahaya) and the Commandant Training and Doctrine Command ( respondents) into Correctional custody for contemptuous order of this Honourable Court made on 12th October 2020.

Justice Abdulmalik in the order declared: “An order is made committing the Nigerian Army Chief of Staff General Farouk Yahaya and the Commander Training and Doctrine Command (TRADOC) Minna ie 6th &7th respondents into the custody of the Correctional Centre for contempt of the order of the this honourable court made on the 12/10/2022

“They shall remain in the custody of the Correctional Centre until they purge themselves of the contempt” Justice Abdulmalik further directed.

Justice Abdulmalik then adjourned the case to December 8 for continuation.

This comes barely 48 hours after a similar order was issued for the arrest and detention of the Inspector General of Police (IGP) Usman Baba by a Federal Court in Abuja .