The Majority leader in the House of Representatives, Alhassan Ado Doguwa has revealed why he threatened to deal with Nigerians if they don’t vote for the ruling All Progressives Congress (APC) in the 2023 general elections. KanyiDaily recalls that the lawmaker was caught on camera during a campaign telling his supporters that he will deal with them if they don’t vote for APC in the 2023 election.

“To God who made me, on election day, you must vote for APC or we deal with you,” Daguwa who spoke mainly in Hausa can be heard telling a crowd of supporters in his home state of Kano.

Reacting to the outrage trailing his comment during an interview on Channels Television, the lawmaker said his intention was to motivate supporters, not intimidate them.

According to him, his controversial comments are mere “political semantics”, “rhetoric,” and “sloganeering” that is commonly used in Kano politics to bolster supporters.

Doguwa said; “That is not a threat. I would never threaten our electorate. What you don’t know about Kano State (is that) Kano State is one very special political space. We have our special semantics in politics.

READ:  Teenager arrested for selling bar of soap as mobile phones to unsuspecting people in traffic

“We have the shenanigans we use during electioneering campaigns. Kano State is an aggressive state in terms of politics of ideology. In Kano State, we have our own way or approaches when it comes to campaigns. You must employ and use what will ginger your people.

“We have inherited this from time immemorial. Asking people to vote for APC or we deal with them simply means – like what you can call shenanigans, political brouhaha which we make simply to ‘ginger’ our supporters, to let them feel that we are on the ground and we will get it right.

“I never meant to intimidate, I never meant to threaten any of my voters. I’m a reasonable person. I have been in election processes for the past 32 years and I’ve never used threats or intimidation to win my elections.

KanyiDaily recalls that Ado-Doguwa had recently warned that the APC may lose the presidential election in Kano state in the next year’s general election. 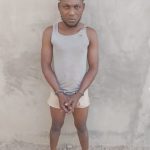