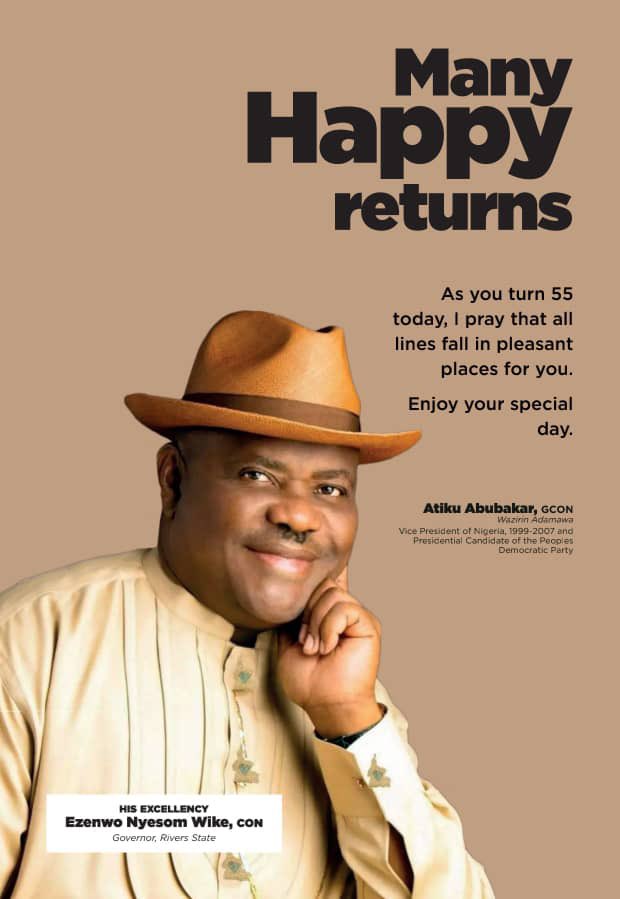 Taking to his official Twitter handle on Tuesday afternoon to celebrate the Rivers governor, Atiku prayed in a short tweet that may lines fall in pleasant places for Wike.

He wrote, “As you turn 55 today, I pray that all lines fall in pleasant places for you. Enjoy your special day.”

As you turn 55 today, I pray that all lines fall in pleasant places for you. Enjoy your special day. -AA pic.twitter.com/c8FboHQ9ra

Atiku’s birthday wish is coming despite Wike’s running battle with him.

Wike has been having a running battle with the former Vice President and PDP National Chairman, Iyorchia Ayu for months, insisting that northerners cannot occupy both positions.

With the official commencement of campaigns for the 2023 elections, the PDP in late September unveiled a 600-member campaign council headed by the Governor of Akwa Ibom State, Udom Emmanuel.

The five governors have not hidden their position and they had vowed not to work for Atiku except for Ayu to step down from office for a southerner to occupy the position.

Atiku and his supporters have been seen at rallies in Bauchi, Kaduna, Akwa Ibom, and a few places.

Wike, since he lost the PDP presidential ticket to Atiku at the party’s primary in May, has for months demanded Ayu’s resignation over what he termed “injustice” to southerners.

In other news, Kanyi Daily reported that the Federal Government on Monday announced the immediate relaxation of the COVID-19 safety measures and travel advisory.

This also included the suspension of all pre-departure, pre-boarding, and post-arrival PCR test requirements.

READ:  "I Will Miss You, But We'll Meet On The Streets Of Abuja" - Dino Melaye Mocks Akpabio [Video]