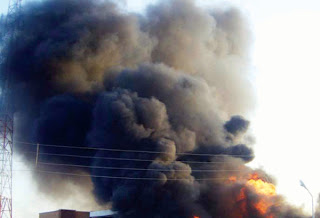 No fewer than three charred bodies have so far been recovered from an early morning fire that started from a fallen tanker conveying diesel, close to the Enugu Prisons.
A deputy police commissioner, Stephen Ekpei, who was at the scene, confirmed the deaths, but denied rumours gaining currency that the fire was the handiwork of Boko Haram.
“There is no bomb scare in Enugu. It was just a tanker load of diesel that fell and eventually igniting a fire.” Mr Ekpei advised residents of the coal city to go about their normal businesses as the situation was under control.
Sikiru Raimi, commandant, Enugu State Command of the Civil Defence Corps, told NAN that the incident occurred when the tanker lost control while negotiating a roundabout.
“The tanker fell spilling the product that eventually caught fire.” According to him, it is unfortunate that the fire followed the trail of fuel to some of the houses close to the scene of the fall.
He re-confirmed evacuating three corpses that were burnt beyond recognition.
Mr Raimi said the members of the fire service arrived in good time to put out the blaze.
Eric Oluedo, Enugu Commissioner for Rural Development, the ministry that oversees the fire service, who was at the scene, blamed the incident on carelessness of the driver.
“It is careless driving. We should take education to every level in this country. We should educate all our drivers and artisans.
“This thing is avoidable. How can an articulated truck negotiate a turn at top speed, only for it to skid.
“I am happy that my men (firemen) responded in time to battle the fire,” Mr Oluedo said.
He, however, noted that the blaze was overwhelming. “You know this is gas and highly flammable.”
The Comptroller of Prisons in Enugu State, Chris Ntewo, said it was a pity the incident occurred, adding, “I thank God that all security operatives were mobilised to the scene. All inmates of the prisons are intact.”
It was gathered that the fire started at about 7am. There was wailing and shouting as bodies of those that were burnt where retrieved by medical teams from the Federal Road Safety Corps, the Police and Civil Defence. The Dog Section of the Prisons Service, VIOs and NEMA officials were also at the scene to lend helping hands.